Apple has released the second beta build of iOS 8.3 for iPhone, iPad, iPod touch and Apple TV. The first beta of iOS 8.3 was released almost 2 weeks back so Apple has been quick to release another new version. 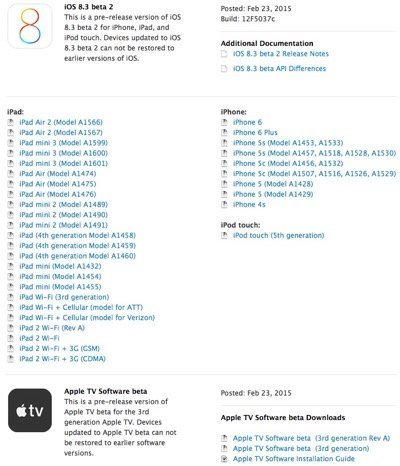 The changelog from the Macrumors forum is as below:

New Features/Changes:
– Apple has also replaced the existing standard watch emoji with an emoji that’s based on its upcoming Apple Watch; the new watch emoji is an Apple Watch with a black band and an analog watch face
– Emoji: Additional flags added for a total of 32 flags
– Emoji: Racially diverse character set which allows users to pick from various skin tones where available (people, arm/hand etc. emoji)
– Emoji: The color on each of the emoji is more saturated when compared to previous builds
– Siri is now available for Danish, Dutch, English for India, English for New Zealand, Portuguese for Brazil, Russian, Swedish, Thai, and Turkish.
– Touch ID “Enter Password” button no longer presented on Touch ID prompts (it does appear after 1 unsuccessful scan)

Apple had also rolled out the fifth beta of iOS 8.2 to developers earlier this month. The final release for the Apple Watch related release is expected in March.

The OTA update for iOS 8.3 beta 2 has not been released yet so you would have to download the complete update from Apple and install manually. If you are a registered iOS Developer with Apple, you can download iOS 8.3 Beta 2 right away from the iOS Dev Center.