None of the iPhone 12 models will support 5G data transfer speed when used in Dual SIM mode, and will fall back to LTE speeds. This has been revealed as per an Apple Sales FAQ document shared with carrier and retail stores staff members.

As we have previously covered, Apple supports iPhone 12 Dual SIM mode on all models via a combination of a nano-SIM and eSIM. This allows users to utilize two numbers on one iPhone, and send and receive calls from both. However, in Dual SIM mode, customers are restricted to data plan usage from one of the two numbers only, at any given moment.

A leaked screenshot of Apple’s training document for retail staff, posted on Reddit and spotted by MacRumors, shows that iPhone 12 will not support 5G data in Dual SIM mode. As per the FAQ:

“Does 5G work with Dual SIM?”
When using two lines in Dual SIM mode, 5G data isn’t supported on either line and will fall back to 4G LTE. If customers are using eSIM only and are on a 5G-supported carrier and service plan, they’ll have 5G access. 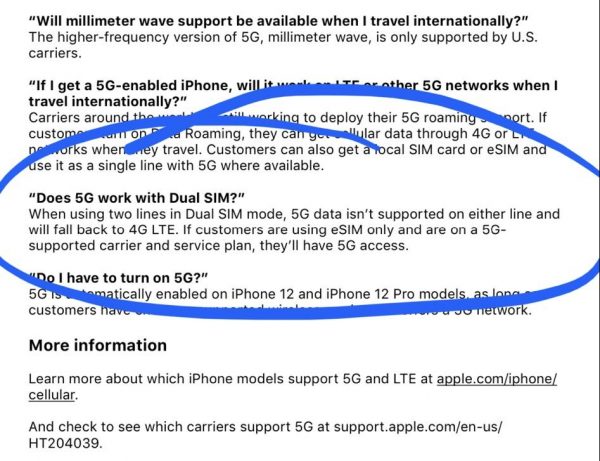 Users who utilize just the eSIM will be able to take advantage of 5G speeds. However, to use 5G when using two lines in Dual SIM mode, users will be out of luck and have to rely on slower 4G LTE speeds.

Before you sharpen your pitchforks and run out to the streets to protest, there is a silver lining to this bit of news. The same Redditor who posted this screenshot also posted a comment that a software update, available later this year, will allow using 5G on iPhone 12, in Dual SIM mode.

Apple had spent most of the event talking about 5G and how their implementation in iPhone 12 is second to none. It will not be a good look for the company if it ships iPhone 12 to users, only for them to find out that Dual SIM will reduce the capability of their expensive new smartphone until a software update is released.