A video has been posted on YouTube that compares the real world usage performance of iPhone 2G, 3G, 3GS and 4 by putting them side by side and clocking the load times of different apps on them. Spoiler: There isn’t much of a different in the loading times of iPhone 2G and 3G, similarly iPhone 3GS and iPhone 4 don’t have much difference either. Which means, if you have an iPhone 3GS, you don’t need to upgrade to iPhone 4 based on speed alone, unless you want a huge amount of memory for multitasking. 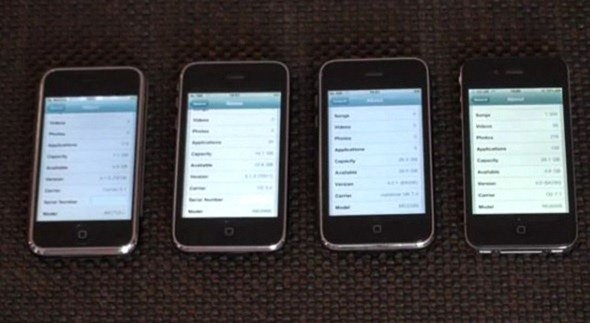 The tested apps are Plants vs. Zombies, Google Earth, Microsoft’s Seadragon and Safari. Even the shut down speed has been compared in the end. One noticeable thing is that iPhone 3GS is twice as fast as 3G in most cases which means that Apple was right about the S in 3GS. In case you’re concerned, iPhone 2G was running 3.1.3, 3G is o 3.1.2, 3GS on 4.01 iPhone 4 is on 4.0. Check out the video below: