iPhone 4 has the best battery life amongst all iPhone models released to date. One of the best features in iOS 4 is multitasking. As multitasking can consume a lot of battery, Apple somehow managed to make an OS which does not eat up all the battery. Apple claims that the battery life of iPhone 4 is much more than the iPhone 3GS  in any aspect whether you Internet use, talk time, audio playback or standby mode. 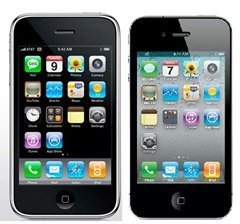 To get an idea of iPhone 4 battery life compared to iPhone 3GS, Macworld performed same tests on iPhone 4,old iPhone 3GS and a newly purchased iPhone 3GS. On these all iPhones they performed the same tasks for the same amount of time. These are the tasks they ran:

On both phones we set the screens to full brightness and rented a standard definition video (Shaft’s Big Score) from the iTunes Store’s 99-cent library, which took about 45 minutes for the phones to download over the office Wi-Fi network. We then played the 1 hour and 43 minute movie in widescreen mode.

Next, I downloaded the free Pandora application from the App Store over 3G and then surfed the Web while Pandora streamed music in the background.

The results were not surprising as old iPhone 3GS gave a talk time of 3 hour and fourteen minutes, new iPhone 3GS lasted for three hours and twenty eight minutes and iPhone 4 lasted for four hours and thirty two minutes. So, iPhone 4 provided thirty percent more time then a new iPhone 4. It shows that bigger battery of iPhone 4 is just not big in size but also has a better battery life.