Just a few days ago , Froyo FRF85B build was released official for Nexus One for both T-Mobile and AT&T users. The Froyo updates haven’t stopped yet as there is yet another build released today. Again, this new update is being pushed off for both T-Mobile and AT&T users. The build number of this new update is FRF91 and its size is about 900k which means it doesn’t have any big changes. 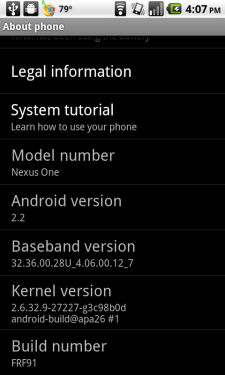 This update is unexpected as earlier this week Google officially announced the FRF85B OTA release. Maybe they found some bugs and fixed it with this update. This update could also be to address security issues. Anyhow, Android (Nexus One specifically) users are now getting used to updating their phones twice a week. Here is the link from where you can download the update manually.