Apple revealed the new iPod touch along with other iPods in their recent media event. Steve Jobs called iPod touch, company’s “most popular iPod”. It is clear why iPod touch is their most famous iPod: iPod touch has always been considered an iPhone without a phone. The latest iPod touch has some new  hardware which includes an A4 Processor just like the iPad and iPhone 4, a new Retina Display, a front-facing camera for FaceTime calls and a rear camera which can record 720p videos. And with all these new hardware features it will ship with Apple’s latest mobile operating system, iOS 4.1. 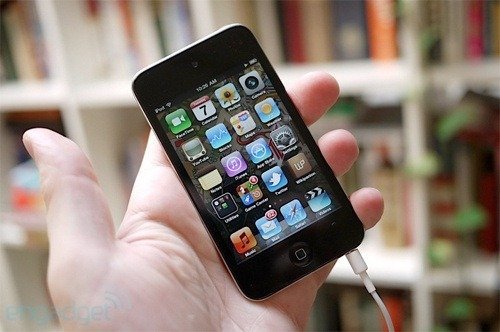 Let’s take a look at what different tech blogs think about the new iPod touch.

In their review, they mentioned that the new iPod touch is crazy thin and it feels little too small in large hands.Even though  it has same Retina Display like iPhone 4 but its display is a little bit superior to of iPhone 4. The video recording of the touch is impressive but the quality of still pictures is not great.

The new touch isn’t magical or revolutionary, or even unfamiliar. What it is, however, is a product without a peer; a media player that does far more than media playing. Besides the smaller screen real estate, the touch might be better compared to a tablet or netbook — it has many of the same functions (more, in some cases).

Don’t get us wrong, the touch isn’t without faults — the lack of GPS and a fairly low-quality still camera come to mind — but there’s nothing major here that gives us pause (and frankly, nothing else like it on the market). With the addition of HD video shooting, the new Retina Display, and a faster A4 processor, the touch has just gone from “nice to have” to nearly irresistible.

People are now likely to use the iPod touch for three main reasons: music, gaming, and video.

For gaming, the combination of the A4 chip and the Retina display makes this an awesome machine. Jobs noted during the keynote that when you consider iOS devices as portable gaming devices, they’re outselling the entries by rivals Nintendo and Sony — combined. That’s likely to continue, if not accelerate from here. Every game I tried ran smoothly and looks brilliant with this screen.

Video is the big new addition here though, obviously. When taken outside (or in good light), the 720p videos look excellent. Inside, in low light, at things things can be a bit murky, but that’s probably to be expected (and there is no flash on the iPod touch).

Photos, however, are a different story. Sadly, the lens in the iPod touch is not the same 5 megapixel variety found in the iPhone 4. Because of that, Apple limits still-image resolution of 960 by 720 pixels — very low. I found still pictures taken with the iPod touch to be grainy — again, especially in low light. The iPhone 4 performs much, much better as a camera.

In her review of iPod touch and other iPod models she was quite impressed with the new additions in new iPod touch but she found Ping socially awkward.

The iPods are a big improvement from the older models with new, smart features, including some borrowed from the iPhone. The Ping social network, however, is a bit socially awkward, especially for people who are used to Facebook.

As for the redesigned iPods, the Touch is remarkably thin, measuring just 0.28 inch deep.  This Touch now has the same sharp Retina Display screen as the iPhone 4, as well as two built-in cameras.

I brought my iPod Touch with me to the U.S. Open tennis tournament last weekend and used it to capture beautiful HD video footage of matches. I was impressed by the high quality audio captured in each video, enabled by a new omnidirectional microphone on the back of the iPod Touch that also captures sounds in front of the device.

Photo quality doesn’t hold up to the iPhone 4’s; there’s no GPS, and no option for 3G data service.

The only real problem with the touch is its high price—especially if you want a decent amount of storage. But with an entry point of $229, you do get a camera, HD video recorder, music and video player, portable gaming console, Web browser, e-mail, and app device in one slick, pocket-size package. There’s just no other portable media player that can do what the iPod touch can do.

The gap between the iPod touch and the iPhone continues to decrease, with this fourth-gen version of the Apple PMP gaining the headline functionality of its fourth-gen cellular sibling. Amazingly it’s even thinner than the waifish model it replaces, down to just 0.28-inches and 3.56 oz, still with a premium-feel stainless steel back plate and black glass fascia. Controls are as before, a home button under the display, sleep/wake on top and volume on the left hand side; the Dock Connector and 3.5mm headphone socket are on the bottom.

Finally, the iPod touch, and if ever there was a device to overshadow the iPhone 4, this is it. It’s tough to imagine Apple being able to shave anything more from the touch, and a brief hands-on with the PMP is enough to convince most that the Apple premium is worth it. $229 for the 8GB model is a step up from the iPod nano, true, but you’re getting a whole lot more potential for your money.