Magikarp Jump is The Pokémon Company’s newest game for iOS and Android. The game is based on training and strengthening a Pokémon, Magikarp, to jump high and win leagues. The game has an old school cartoonish design like Pokémon anime and a captivating story to go with it. 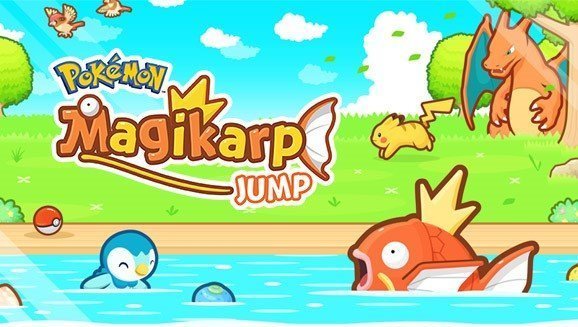 Magikarp Jump starts with the user selecting their preferred language and age. The narrator of the game, Mayor Karp, gives the background story, explains the game’s purpose and provides instructions to how to catch, train, and fight with a Magikarp.

Although Magikarp has a retro design, the game’s levels have a contemporary complexity to keep it interesting. Pokémon trainers have to complete various tasks to increase their Magikarp’s jump power (JP) and strength to challenge leagues, collect rewards, purchase items, and more. Tasks include activities like swiping to swim across the pond to find food, tapping on items to eat them and training to jump higher by increasing JP.

There are two features in particular which made me enjoy the game a little more, support Pokémon and live commentary. Support Pokémon brings the creatures of Pokémon Go world to Magikarp Jump. If users have a friendship item, they can invoke the help of support Pokémon with special skills to help the Magikarp grow, improve its JP or restore training points. The battles between Magikarps for highest jumps are animated by live commentary, which is very entertaining.

Pokémon Go became a world wide sensation within days of its roll out in USA in 2016. The gradual country-wise roll out of the game took it to great heights of popularity that its fever took over social networking sites, leisure time and celebrities alike. It only makes sense that The Pokémon Company decided to continue with the fervor of the game and release Magikarp Jump.

Magikarp Jump is available for free for iOS and Android users. Users can make in-app purchases of coins to speed up training, replenish food stock and catch more Magikarp. Regardless of its low CP in Pokémon Go, Magikarp is the star of Magikarp Jump and will have users hooked to it.