Despite faster processor and more RAM, it is a well established fact that Samsung’s Galaxy S8 has been unable to dethrone the performance king, iPhone 7. No surprises there, however what is shocking is that Apple’s 2015 flagship, iPhone 6s, is also able to beat the Galaxy S8 in a speed test, thanks to its A8 chip and iOS’ superior RAM management. 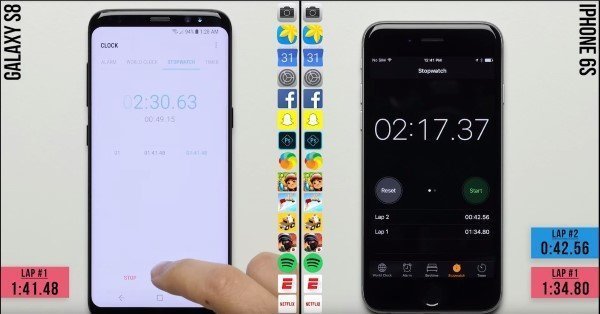 Samsung Galaxy S8 comes in two octa-core processor variants: a Snapdragon with 4 cores clocked at 2.45 GHz and 4 cores at 1.9 GHz, and an Exynos version with 4 cores clocked at 2.5 GHz and the other 4 cores at 1.7 GHz. The Exynos has historically been faster than Snapdragon but this time, there is no clear winner between the two. So in this speed test comparison, when an Exynos Galaxy S8 is pitted against iPhone 6s, you can rest assured that there is no slow device variant being used here.

The speed test, done by PhoneBuff, takes both phones through two rounds in which the same apps are launched, back-grounded and than re-opened again. Both phones start off in a state where these apps weren’t opened at all so in the first round, the apps are loaded freshly from the storage. In the second round, RAM management comes into play since apps should resume faster after being launched once.

In 2017, it is acceptable that a 2015 model iPhone would show slowness which is obvious in the first lap of the test where Galaxy S8 launches a few apps faster, due to modern hardware as well as faster animations. However, in some apps like Snapchat and many games, iPhone 6s starts cementing its lead. Despite more RAM (4 GB), Galaxy S8 is simply unable to keep up in the second lap, thanks to iOS’ exceptional RAM management.

A speedtest might seem ‘unscientific’ to some users but even in Geekbench, iPhone 6s beats Galaxy S8 in single-core benchmarks. It’ll be interesting to see how the upcoming A11 chip in Phone 8 would widen the performance gap seeing that flagship Android devices are still having a hard time catching up with the iPhone 6s.