A new speed test video between iPhone 6s and Galaxy Note 7 has proven that despite more cores and RAM, Samsung’s latest flagship smartphone is unable to beat Apple’s iPhone in real-world multitasking performance. 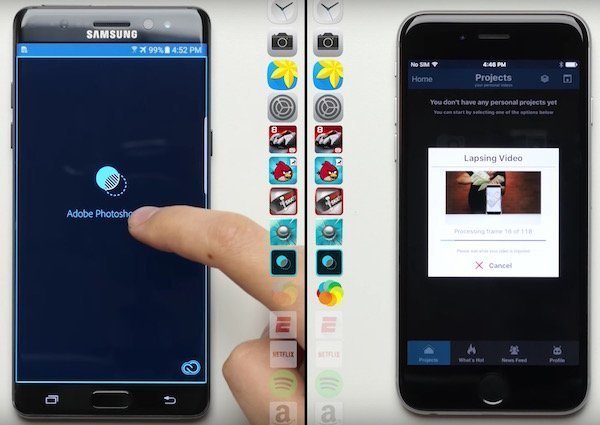 The video in question is by PhoneBuff and it pits the two flagships smartphones against each other in 2 laps of a speed test. As it turns out, Galaxy Note 7’s Snapdragon 820 processor with 4GB of RAM was unable to defeat iPhone 6s’ A9 processor with 2GB of RAM. iPhone 6s has remained the undefeated speed test champion throughout its life cycle, as claimed by PhoneBuff. It has beaten the likes of Lumia 950XL, Note 5, Nexus 6p, Galaxy S7 (both Snapdragon and Exynos variants), HTC 10, LG G5 and lastly, OnePlus 3, the phone with 6GB RAM.

In case you do not know, here’s how a speed test works. Competing devices are put through a sequence of app launches and closes in the same order and the time is measured. The winner is the device which takes the least time for apps to completely start. A second lap is normally used in a speed test to see how quick the apps resume, once they are already in the memory since they were launched before.

The video takes both Note 7 and iPhone 6s through a number of apps which include camera, a few games, a time-lapse rendering app and more. iPhone 6s starts taking the lead as soon as Asphalt 8 is launched and keeps increasing it from there. In the end, Note 7 loses by a margin of almost 1 minute.

Check out the speed test video below:

If the speed test was not enough, XDA Developers have written a scathing piece which highlights the numerous performance issues with Galaxy Note 7. From scrolling to horrible memory management (a ‘feature’ carried over from Note 5), to animation frame drops and throttling, Note 7 is full of performance flaws that have been ignored by most reviewers who gave raving reviews to the device. As it turns out, an honest review cannot be done in just a few days and real-world performance is the opposite of what most reviewers claim.