The Zune HD is half naked when it comes to apps, it’s just short of everything for now. Even though it got a Facebook and Twitter app after a long wait, but that’s just about it. But now Microsoft has just released 3 new apps for the Zune HD, not quite exciting, but the Zune HD Marketplace is slowly getting crowded with games and “functional” apps.

Stopwatch is really simple, down to earth app and it does exactly what the name says. It’s a plain stopwatch with simple functionality like laps and countdown, great if you plan to go drive a Formula 1 car with a Zune HD on the dashboard. 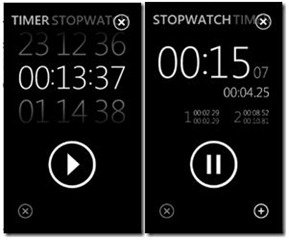 The second app from Microsoft is Labyrinth. Many of you might remember Labyrinth from the iPhone, it’s almost the same thing except it has more catchy graphics and is more pleasant to look at. A fun game to play while listening to your favorite songs.

You can get all these games from the Zune Marketplace using the Zune software or directly from the Zune HD itself. Try out these apps/games and tell us what you think, do they compare themselves well with the iPhone or not?

P.S. if you want more games and apps for Zune HD, check out OpenZDK