Microsoft Vine is the Redmond Giant’s take on Twitter. It’s actually more focused on the real-time web and happenings rather than starting conversations as in Twitter. Vine will be used to stay in touch, informed and involved when it matters. It comes with its own slick-looking desktop app, based on WPF.

The application has a map built in, where you can stay in touch and up to date with the happenings. Alerts pop up in various places on the map, so you can know exactly where what is going on. You can set your preferred place on the map, and see headlines from over 20,000 local media sources and public safety information from  US NOAA. 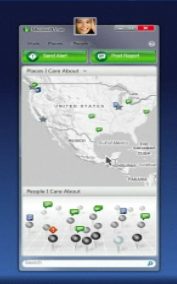 Under the map, you’ll see the people you care about and know when they send you an alert, report or update their Facebook status and even Twitter. You can send alerts as well, to keep other people updated. A very important but missing feature from Twitter groups, which has been implemented in the Vine desktop application, to help you set up different groups of friends. Using the group’s feature, you can send alerts to particular groups at any time.

Four types of reports can also be shared, which include, letting your family know you’re safe, telling your trusted neighbors to know that you’re away, keep people informed of situations that matter and share general information. A mobile can also be setup and to send and receive alerts when you’re away from a PC.

The service is currently in a limited beta and will be available to the public in May. Vine doesn’t seem to be competing Twitter, instead, it would do what Friend Feed and Twitter haven’t been able to do, reduce the noise and keep you up to date with what matters. I can already see Vine being used for covering events or cover the spread of Swine Flu to keep people updated.

Currently, the service is available for only the US and you need a Windows Live ID to use it, but if the people I care about works for non-US users, I see a lot of people who would jump on the bandwagon for this service. You can check out a demo video of the service here.

Update: There’s a nice overview on Microsoft Vine over at TechCrunch, which actually strengthens my opinion that Vine could become popular.