Adrian Kingsley over at Hardware 2.0 has done another comparison between Vista and 7, keeping XP out this time, and based on gaming performance. He doesn’t reveal any accurate numbers for his benchmarks as that is against the Windows 7 RC EULA ( I wonder if using a leaked build is against that as well?! ). The benchmarks have been run on a fairly powerful system, with graphics cards ranging from mainstream to enthusiast performance, an Inter Core 2 Due E8500 processor overclocked to 3.6 GHz, 4 GB of RAM and pixel killing games like Crysis Warhead, Far Cry 2 and Left 4 Dead, all at a resolution of 1,680 x 1,050. 32-bit versions of both OS were used.

Here are the benchmarks for Crysis Warhead. The rest can be seen on Hardware 2.0 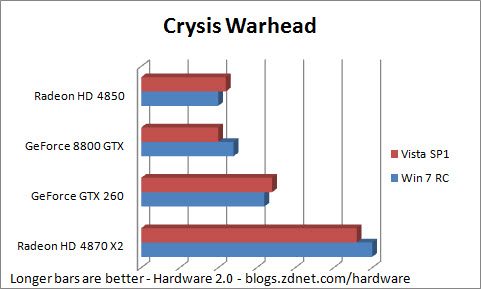 As you can see, it’s really a head on competition between Vista and 7, with both winning in an equal number of benchmark shootouts for Crysis Warhead. Keeping in mind that Windows 7 has just reached the RC milestone, and the video drivers aren’t really 100% up to the mark, I bet we might see these figures changing and 7 gaining more fps when it hits RTM. Vista wasn’t a viable option for gamers until it reached SP1 and the video drivers matured for it. Hopefully, it won’t take that long this time for ATI and NVIDIA to get their act together.

Windows 7 is Microsoft’s ‘fix’ for Windows Vista and is shaping up to be a really good operating system. It keeps most of the new features that were introduced in Vista and fixes many of them too, such as Universal Account Control as well as performance. Windows 7 will improve performance on multi-core systems, and it is evident somewhat, in the gaming benchmarks.