Steve Ballmer isn’t one to be impressed easily. When he said that iPad sold more than he would have liked, it was obvious he doesn’t like it. He is representative of the general approach towards tablets/slates by Microsoft. They just don’t get them. Cramming a desktop operating system since more than a decade into a tablet hasn’t been fruitful for them, but still this is the strategy they’re gunning for to take down the iPad. Yes, it’s stupid but funny at the same time. 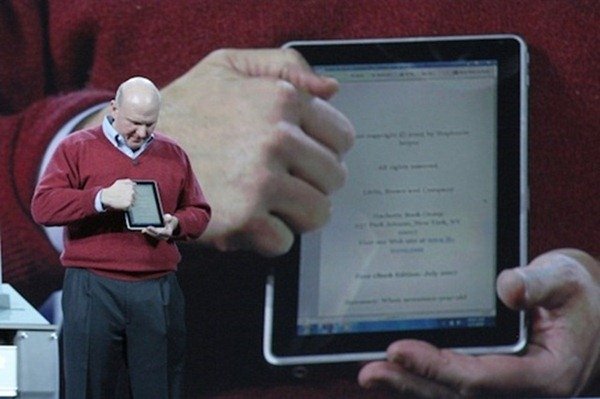 It’s not difficult to see that the success of iPad lies in iOS. Apple made a very smart move by not putting the desktop OS X in it but choosing for a tried and tested ( and hugely successful ) finger touch capable OS. There is no app, no setting, no control in iOS that you can’t easily manipulate with a finger. On the other hand, you rarely are able to do that in Windows 7. Where you can, it’s clunky at best.

Steve Ballmer still thinks that Windows 7 will help them win the tablet wars. As a tablet user myself ( I own an HP TX2 and an iPad ), I highly doubt that will happen. At the Financial Analysts Meeting, Brad Brooks demoed a slate and showed the possiblities. Here’s what he showed off according to Microsoft Pri0:

Photo editing. Brooks spliced together a group photo of Sounders fans using the new Windows Live photo editing software. Four people are in a group, none were looking at the camera in all the shots, so Brooks pasted together the four photos so everyone was facing the camera. He then took that photo and did some …

Um great feature, but would this be a selling point of a tablet? No. This is a Windows Live Essentials feature which is used by a mouse. Anyone who thinks that the ribbon interface in Windows Live Apps is touch friendly should be kicked by usability experts at Apple.

Video messaging. With the new versions of Windows Live Messenger, which is now in beta, Brooks did some live video chatting on the device and shared his new photo. The iPad does not have video chatting capability, and it’s unknown whether any future Windows 7 slate device would have a camera built in, but the one Brooks showed on stage did.

I admit, video messaging isn’t possible on the iPad. But using Windows Live Messenger on a touch based device is horrible. Wrong choice of tools and UI, Microsoft!

This is possible on the iPad already thanks to many wonderful apps out there like Air Video, StreamToMe and many more. The ultimate remote control in the Windows demo slate seems to be Windows Media Player, but sadly, it’s not touch friendly either. Maybe Brad Brooks needs to take a look at how much iTunes for Mac/PC and for iPad differ in looks. That ought to give them a crash course in what is acceptable in a finger touch friendly tablet and what is not. On a side note, it’s funny how there’s no mention of battery life.

Android on a tablet has better chances of giving some tough competition to the iPad but I’m just being optimistic. For Windows 7 on a slate, I’m totally pessimistic.