The iPad is a big success and currently no other tablet can even think of competing its sales figures. iOS is the best operating system available for any tablet device but still Microsoft hopes that they can compete with it using Windows 7 on a tablet. They just don’t learn do they? Microsoft CEO Steve Ballmer said today at a company conference where he acknowledged the early success of iPad and said that they would launch their version of a tablet soon as reported by CNET. 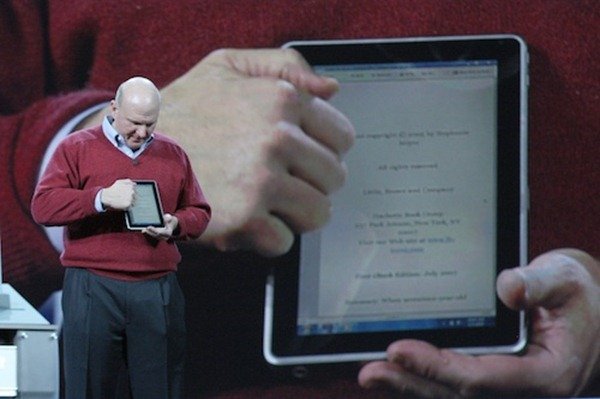 “They’ll be shipping as soon as they are ready,” Ballmer said, offering few details on the products, which he said will come from partners, not Microsoft itself. “It is job one urgency. No one is sleeping at the switch.”

He further said Microsoft does not just want to deliver products but they want to deliver product which people want to buy. But looking at the current sales of iPad it looks like people aren’t going to be much bothered about a ‘slate’ which runs a desktop class operating system. People don’t seem to have bothered over the past decade, why no? Microsoft would really have to offer something special to deliver anything better than iPad preferably without Windows 7.

On the iPad’s success and its huge sales Ballmer has interesting views.

As for Apple and the iPad, Ballmer said, “they’ve sold certainly more than I’d like them to have sold.”

Windows 7 based tablet HP slate was announced before the iPad but things really didn’t work out for HP. On the other hand, iPad had a big successful launch as Apple sold more than 3 million iPads in the first three months of its launch. Microsoft was also supposed to compete with the iPad with the launch of Microsoft Courier. But the work on both HP slate and Microsoft Courier was stopped at the same time when people were getting crazy to get their hands on an iPad. A lot of Android tablets are also in the works since a long time now, but we have yet to see any real product in the market that can give the iPad any sort of competition. Just like the iPod Touch, the iPad is an undisputed champion in its class. Overall no tablet is able to compete with the iPad till now and things certainly do not look better for any other company in the near future.