After looking at many 30 second teasers of HP slate people surely would have said “wow”. Well now Conecti.ca got some photos of HP slate and it really does not look like what we saw in the videos. I was expecting that after taking such a long time HP would launch something different from netbooks but these images show that HP slate is just like a netbook without a keyboard.

HP Slate has Windows 7 installed and HP TouchSmart optimized UI but still it looks more like regular windows which can sometimes be “slow and annoying”. It runs everything including Flash, Adobe Air and Silverlight thanks to Windows. 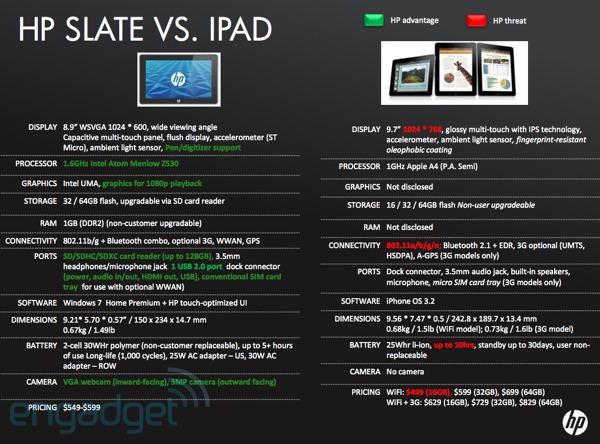 Despite all the hype, these images would have flattened the expectations of those who were waiting for it. In one image HP slate is compared with Apples iPad. iPad has two things which haven’t been disclosed in it’s specs, graphics hardware and RAM. Well, if with the iPad being so smooth at all the tasks it does, nobody wants to know. HP Slate’s battery life is also less than the iPad – way less. The biggest plus point of iPad it seems is that it has iPhone OS 3.2 which I think is better for a tablet PC then Windows 7. HP slate does have a few features that are not in iPad like camera and extendible memory but still we are not sure if it has anything special to complete with the iPad.