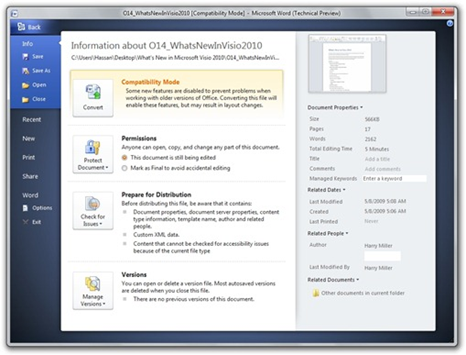 Office 2010 is the latest version of the Office productivity suite by Microsoft. It has become richer, streamlined and feature packed than previous versions. New features such as Backstage provide quicker access to various features. It is currently in Technical Preview. Here’s a FAQ to answer the most common queries that readers have about it. If there are any more questions you would like answered, leave them in the comments.

Office 14 is the version number of Office 2010, which is the name of the latest productivity suite by Microsoft which is one of the most popular software suites in the world.

What is Office 14 Technical Preview? Where is the Beta?

Office 14 has been released to a selected group of testers ( including yours truly ), as a Technical Preview so that they can get feedback and improve along with the usual bug fixes. Technical Preview is Microsoft’s term for Beta.

How can I get the Technical Preview build of Office 2010?

You can sign up to be on the waiting list to participate in the Technical Preview program.

Office 2010 features improvements to the UI and contains new multimedia insertion and editing capabilities. It features better collaboration features and anywhere access. It is also the first version of Office to be developed in 64-bit flavor along with the usual 32 bit. For a comprehensive list of features check out this link. You can see some of the features here as well.

When will it be launched?

It is expected to be available in the first half of 2010.

There’s not much difference in terms of performance in both versions but it is recommended that you use the 64-bit version of Office with a 64-bit OS. You’ll find some improvements in processing speed when working with huge excel sheets or databases in access.

The leaked build has a higher version number than the Technical Preview build. Why?

The leaked build is an internal post-beta build, hence newer than the technical preview. It’s not recommended that you use the leaked build but participate in the Technical Preview to provide feedback to Microsoft and help improve it.

Which editions of will are available? What are their features?

Here’s the comparison table from Wikipedia which shows the different editions that will be available along with their programs and features:

Will it work on my favorite operating system?

Yes, it will work on Windows, Macs, and Linux as long as you use a compatible browser. Office Web Applications will even work on your iPhone!