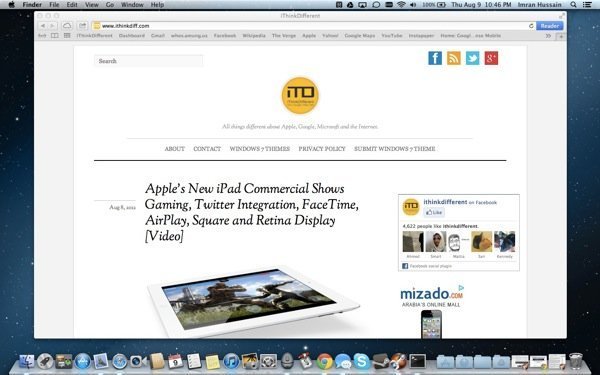 Even though it’s been a few weeks since Mountain Lion was released to the public, Apple is already reported to be working on seeding the first test build of OS X 10.8.1 to developers as per MacRumors. This should be a maintenance update with bug fixes and stability and performance patches that couldn’t make it to OS X 10.8

Some of the most talked issues, that we hope to be fixed in OS X 10.8.1, are battery life performance as well as Save As functionality in apps. The battery life has been tested and proven to have gone down by as much as 20% for users who upgraded to Mountain Lion. This is happening across all MacBook models whether it’s the Air, Pro or the new Retina Display model. Some said that fixing permissions removes the battery life woes but it’s not helping the majority of users. Apple has already been collecting logging data to narrow down the reason for this huge decrease in battery life for users. Long battery life is one of the many reasons why many users, including here at iTD, chose MacBook’s over other portable computers so having being hit with a 20% reduction is no small deal.

The second issue is saving as functionality. We’re not sure how Apple plans to fix this or if it’s even focusing on it but the problem goes something like this: If users edit a document and chose to save as it overwrites not only the original document but also its copy. Normally, you should be able to revert back later but if you don’t, the original one would be lost. We’re hoping Apple is trying to fix this bug as well since this is bound to cause many issues among users.

Apple normally releases OS X 10.x.1 builds quickly to fix issues in the major releases. This has been a trend with previous releases such as Snow Leopard and Lion as well. We’re hoping to see the developer build out in a week or two so we would really know what fixes it would include. As usual, we’ll keep you updated on the latest happenings on Mountain Lion.