Readdle, the popular developer for iOS and Mac apps like Spark, Documents, PDF Expert and Scanner Pro, has released a major update which brings drag-and-drop file support across its apps on iPad. This comes along with tons of other performance improvements and bug fixes for all the apps across iPhone and iPad. This drag-and-drop feature might not seem big to desktop computer users, but for regular iPad users, this is a much awaited addition to these productive apps. 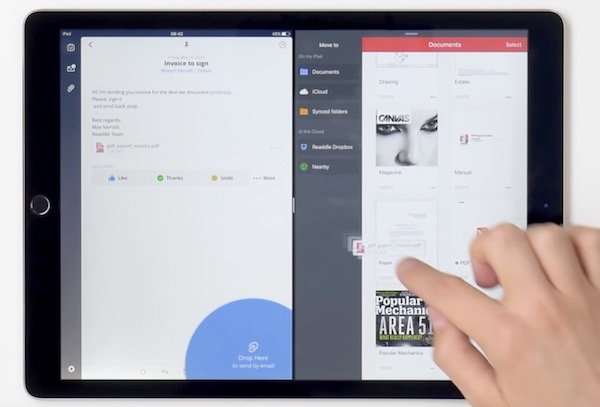 The drag-and-drop works in iPad’s split-screen mode. Users can drag images and other content from one app to the other. This opens up a whole new level of productivity on iPad. Readdle have done the impossible on iOS/iPad before even Apple got around to implementing this pro feature. Here is a video of the new functionality in action:

Of course, due to iOS’ limitations, this functionality is restricted to only these 4 apps from Readdle. Let’s hope Apple already has this functionality on the cards for iOS 11 which is expected to be announced next month at WWDC.

Along with drag-and-drop, here are other improvements across Readdle’s apps for iPhone and iPad:

To use the drag-and-drop feature, you must have an iPad which supports iOS’ split-screen multitasking. This includes iPad Pro (all models), iPad Air 2 and iPad mini 4.