Mike from Macsoda wrote 9to5mac that he got a response from Steve Jobs to his email regarding the Future Cut Pro (40 of its developers were let go). Steve Jobs said:

No worries. FCP is alive and well.

9to5mac team asked him to send header information from the email, which he did. 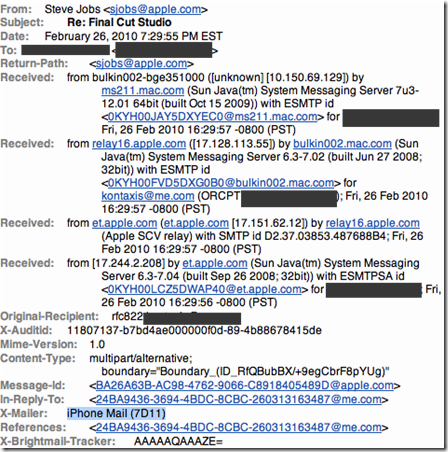 But if you think deeply, why do you think Steve Jobs still has the old firmware on his iPhone? Does he think the latest version isn’t too good for him? Is he waiting for a major update? Or does he have a jailbroken iPhone and he doesn’t want to update (Joke)? Whatever the reason is, he really should update his iPhone by plugging it, and checking iTunes for the latest firmware.