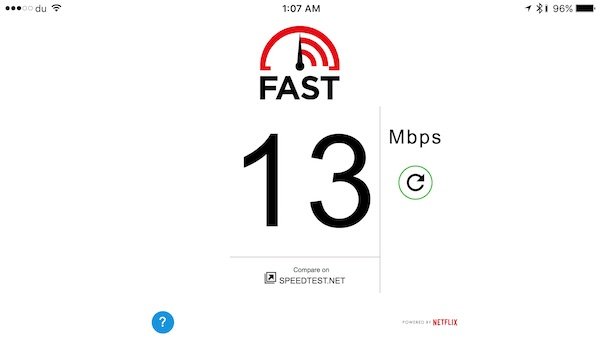 Fast has a simple interface. The streamlined design of the app focuses on simplicity rather than overwhelming animation offered by other similar services, and it delivers results at an amazing speed. Fast only tests download speed, which is what majority of users are concerned with. It does not go into any technical details at all and only shows the download speed measurement.

Netflix began offering its speed testing services a few months back at Fast.com. With the release of the app, Netflix has extended the service to iPhone and iPad users. Although the website worked on both desktops and mobile devices, the app makes using the service much more convenient. Since launch, Netflix’s Internet speed testing service has made its mark against well-established services like SpeedTest by Ookala. Fast’s simplicity and speed have attracted many users, who have given the service four-star reviews and dubbed it “better than speed test”. After users run a test using the Fast app, they get a link to SpeedTest’s website to compare it against other users, so Netflix is not really in a competition here.

One might wonder why does Netflix provide an Internet speed testing service? There are two possible reasons. Firstly, Fast enables the company’s subscribers to check if their Internet connection is strong enough to support Netflix movie streaming. Secondly, it is also a source to collect data on users’ ISP’s performance around the globe. This information will help Netflix to analyze the actual performance delivered by Internet Service Providers compared to what they promise.

Fast is available on the App Store for free. It requires at least iOS 7.0 and is compatible with iPhone, iPad and iPod touch.