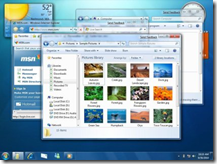 Aero Shake is one of the coolest features in Windows 7 that lets you shake on application’s Windows which minimizes the everything else. It’s really awesome and has been shown in Windows 7 advertisements too. Ever wondered about the developers who worked on this innovative feature? Song Zou, principle development lead for the Windows Core Experience Team and a Microsoftie for 12 years helped create the Windows 7 taskbar as well as the Aero Shake feature.

Song worked for 3 years with the Windows 7 Desktop Experience Team developing and testing the improved Start Menu, the new taskbar and Aero Shake, Aero Snap and Aero Peek – collectively known as ‘the Aeros’.

Song is very proud of his work in Windows 7 and it shows in his interview he recently gave to Microsoft PressPass. Here are some of my favorite snippets from the interview:

There’s been a lot of talk about the new Aero Shake feature. How does it work?

How are people reacting to Aero Shake?

Users love it. We had the usability tests and this is one of the features that got people excited.

When you were building these new features, what was the biggest challenge or hurdle you faced?

To make sure we made the right changes. We worked on the core UI (user interface), and it is something millions of users use every day. We wanted to make sure every change we made was something well thought out.

What was a typical day like during the height of building Windows 7?

The new taskbar (team) had eight or nine developers and a similar number of testers working on it at the same time. Our feature team had a daily sync up meeting from 11:30 a.m. to 12:00 p.m. During the meeting, the developers, testers and project manager talked about where everyone was so we were in sync. I usually tried to do most of my coding before the daily meeting. Late in the afternoon, it was usually daily triage. The program manager, development, and test leads from the feature team tried to go through our incoming bugs for the day. Sometimes we got 300-plus bugs a day.

Was teamwork important to development of the desktop features?

Absolutely. Many of the new UX (user experience) features in Windows 7 were done by many developers, project managers and testers on the feature team. We also wouldn’t have been successful without the help from the design team, usability team, and many other teams at Microsoft. From helping us get the best performance to making sure customer feedback gets to us, many people on the Windows team worked together to make the new UI features successful.

Interesting stuff right? Check out the rest of the interview at the PressPass website.