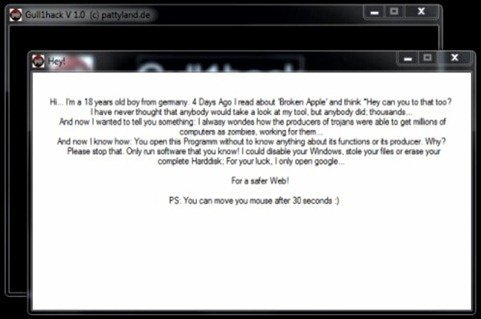 I can’t believe  the outrageous number of fake jailbreaks spreading on the internet. One of them is Gull1Hack. The 18 year old German that made the Gull1hack has come clean and told the truth, ending his scam. Gull1hack really fooled many into believing it had the code to a new bootrom hack (I mean I almost got fooled).

What does it really do?

Well it’s one messed up application. That’s all I can say. It disables your mouse for 30 seconds and opened a page full of Google Ads. The developer of Gull1Hack said he made the gull1hack tool to see how many users would fall for it and how many would install it without bothering to find out what the program’s functions are.

He could have made it more damaging by planting a virus and stealing passwords and files for example. This makes us think twice before using untrusted and unverified tools. Everybody should take this as a warning. Don’t just download the latest jailbreak tools claiming they can jailbreak everything. Make sure it’s confirmed working, so you don’t end up with bad consequences.

The fake gull1hack videos are posted on the gull1hack website, and the developer shows you how he’s done them. This should increase awareness among jailbreak communities. Jailbreakers are using tools because they desperately want a jailbreak, so the makers of those tools are taking advantage of the situation, and are scamming them. I hope all other failbreak tool makers come clean like the gull1hack maker did. Be aware of other failbreaks such as SpartanBr3ak and br0k3n_appl3.