It’s that time of the year again when the next flagship Android phone is released, yet again, to dethrone the current contender. Normally, the attraction to upgrade is based on the feature set of the device. But when you look at the Galaxy S and then Nexus S, there aren’t many benefits in upgrading apart from a few features such as NFC, gyroscope, and flash. But the major feature in Nexus S is Android 2.3 aka Gingerbread. This is the latest update to Google’s mobile operating system and now that they’ve tied it with a new Google experience device, you can be rest assured that the next OS update will be released on this device first. 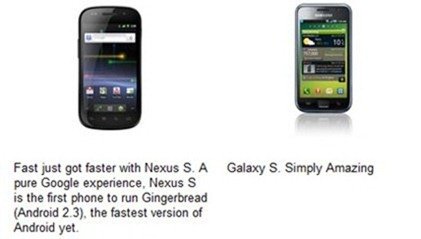 Enough of the pros of Nexus S, there are a few things you should know before taking the jump too. It’s highly likely that Galaxy S will be upgraded to Gingerbread because internally, both are basically the same phones at the core. Both Nexus S and Galaxy S are powered by a 1Ghz Hummingbird processor as well as 512MB of RAM. And those who complained about some Android issues with Galaxy S should be excited that Hummingbird optimizations would be there in Gingerbread because the flagship Google phone runs on the very same processor now. Yay!

In terms of hardware, where Nexus S has been introduced with a few new features and some missing from Galaxy S, it is missing out on a few features itself. It doesn’t support 720p video recording ( boo!! what the heck Google?! ), no FM Radio ( again, what??) and the battery life hasn’t improved that much either. Both have a 1500 mAH Lithium Ion battery.

So basically, if you’re using a Galaxy S, you could hold back in hopes of getting Gingerbread for your phone soon which could be a long time. If you have money to burn, go for the Nexus S. Hopefully, you won’t be disappointed.

* A slight mistake in the comparison. The talk time for Nexus S is 6.7 hours vs Galaxy S has 6.5 hours on 3G. For 2G, Nexus S provides 14 hours vs. 12.8 hours for Galaxy S. The battery timings for Galaxy S are provided for Android 2.1 although Android 2.2 is available for the said handset.