Windows 7 has good multitouch support in various places such as explorer, windows photo gallery and so on but it’s not as fluent  as one would like or would have experienced with OS X Lion or Mountain Lion. It doesn’t support inertial scrolling, navigation with 2 fingers and much more that OS X does. A simple method to get all these working on Windows on Bootcamp is to install Trackpad++. 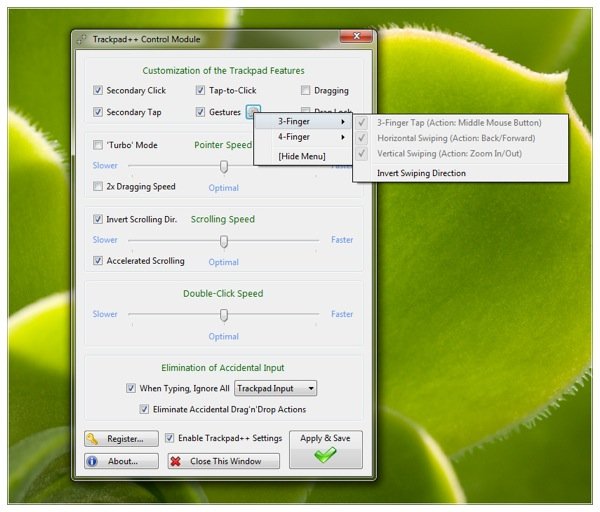 Trackpad++ is a driver plus application combo for any Windows on Bootcamp installation for the following MacBooks:

Installation is very simple and once you’re done, you can simply set it up using the provided straight forward settings panel. Trackpad functionality such as 3 and 4 finger detection can be enabled. Features such as secondary click, secondary tap, tap to click and more can be set to either 3 fingers or 4 finger gestures. Scrolling similar to Lion can be implemented – this includes both inertial scrolling as well as natural where the content scrolls against the direction of 2 two fingers swipe gesture. This takes some getting used to, but once you do, it is very ‘natural’ indeed.

A few more customisations such as pointer speed, palm detection to disable touchpad when typing, double click speed and more can be applied based on one’s likings. Since the program supports so many options, it’s best to experiment with it to find the best combination of gestures and speed settings that suit you.