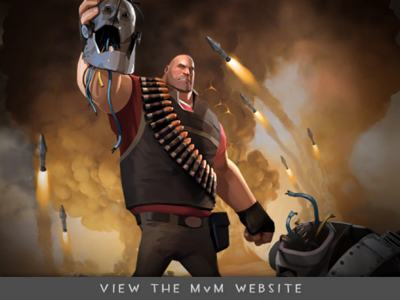 Mann vs Machine update for Team Fortress 2 is finally live after so much hype about a third new faction which turned out to be the machines. Even more new maps and new ways of fighting robots have been revealed. The new maps are Decoy and Coaltown while 35 new achievements have been added as well as new weapons and wait for it.. new hat too. The character from Team Fortress 2 universe, Saxton Hale has also answered a few questions related to the missions and the badges.

Tickets have also been added, which we are bought from the Mann Co store. How badges are earned is that when players complete given missions, its progress is updated and rare items are provided during the game. One of the new badges is called Tour Of Duty Badge which is required to play on the official Mann vs Machine servers. The second Squad Surplus Voucher allows helping team members get items if the player has equipped this.

Valve has also added a Canteen where we players can customize classes to make them better and healthier to fight. Engineers can make their sentries real quick, Snipers’ jarate can be upgraded to slow down the Machines, Spy can sap the Machines and there are more goodies for other classes as well to balance the equation against the robot. Each Canteen holds up to 3 single charges of the same type.

There’s a lot to understand in this update so it’s best to fire up Steam and update TF2 if you haven’t already. In game, help will guide you in getting the badges and playing in the new Co-Op mode. Enjoy!