Twitter is adding #Stickers for photos uploaded via its official mobile apps. With the new update, you will be able to resize, rotate and decorate your photo with multiple stickers, and share it with the world with the hashtag #Stickers.

Twitter will be giving you freedom to exhibit creativity in photos that by searching for rotating sets of stickers to participate in on-going conversations and by selecting emojis, props and more, from the hundreds of options available in the library. 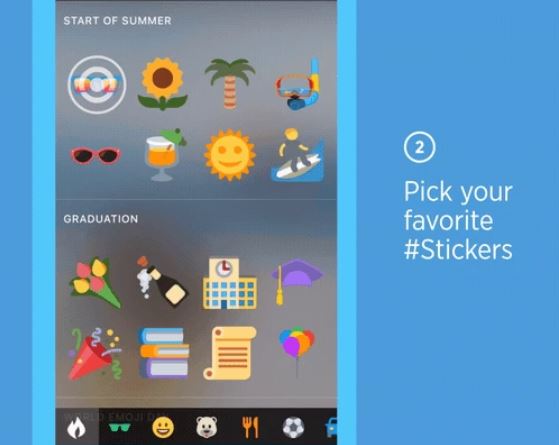 The company has also devised an innovative use of the hashtag #Stickers to share photos. Once a photo has been modified with stickers, it will become searchable, which will give you access to view the global use of those stickers. All you have to do is to tap on a sticker and that will direct you to a new timeline where you will be able to view the different uses of that sticker by people around the world. This ingenious visual spin on the hashtag has earned it a place in Twitter’s photo editing features such as cropping, filter and more.

Coming soon! Unleash your creativity by adding fun #Stickers to your photos on Twitter: https://t.co/Ph92Oivyhy pic.twitter.com/NZoM6nHenD

The fascination with stickers has taken almost all popular social media websites and messaging services by storm. Facebook Messenger and Snapchat already had stickers since a long time while Apple is adding the functionality to iMessages by opening it to third party developers. WhatsApp is also rumored to be working on stickers. Even BBM has stickers, in case anybody still uses it.

#Stickers update will be rolling out soon to Twitter’s mobile apps while the ability to view and search for photos with stickers will be available on Twitter’s website too.

You can learn more about how to use these photos features on Twitter here.