Twitter is testing a new feature called ‘Safety Mode’ which is aimed at helping users limit “unwelcome interactions” on their feed. The feature will impose an automatic seven-day block on accounts that use potentially harmful language including unwanted, spammy, or abusive replies.

Users who want to reduce disruptive interactions can turn on Safety Mode. When the feature is turned on in Settings, Twitter’s systems will “assess the likelihood of a negative engagement by considering both the Tweet’s content and the relationship between the Tweet author and replied.”

We want you to enjoy healthy conversations, so this test is one way we’re limiting overwhelming and unwelcome interactions that can interrupt those conversations. Our goal is to better protect the individual on the receiving end of Tweets by reducing the prevalence and visibility of harmful remarks.

If Twitter’s technology deems a user to be harmful or uninvited, they will be auto blocked so they will temporarily be unable to follow your account, see your Tweets, or send you Direct Messages for seven days. Note that Safety Mode does take existing relationships into account so users you follow or frequently interact with will not be auto blocked. 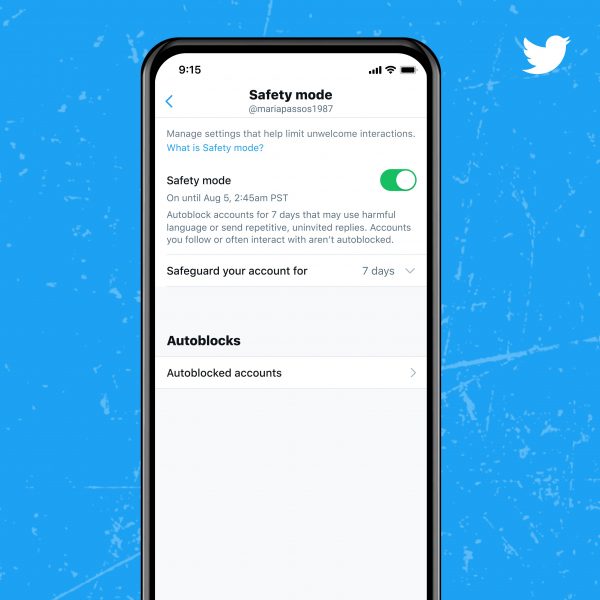 The social media giant conducted a number of listening and feedback sessions with trusted partners that are experienced in online safety, mental health, and human rights, including members of its Trust and Safety Council.

“As members of the Trust & Safety Council, we provided feedback on Safety Mode to ensure it entails mitigations that protect counter-speech while also addressing online harassment towards women and journalists. Safety Mode is another step in the right direction towards making Twitter a safe place to participate in the public conversation without fear of abuse.”

Currently, the feature is being tested with a small group of users on iOS, Android, and Twitter.com. The company will work on improving the feature based on the feedback received from the testing group before releasing it for all users.