Before you say that Office 2010 Starter Edition will be available for free, read this: this tip is for the full versions of Office 2010 such as Professional and so on. Just like Windows, Office 2010 runs for 30 days as a trial without being activated with a product key. After this trial period, it can be re-armed to run for another 30 days. This grace period can be extended 5 times, which means you can use it for 6 months without activating.

While this trick can be executed via the command line, a tool has been made dubbed ‘Office 2010 Trial Extender Tool’ which makes rearming as easy as a click. 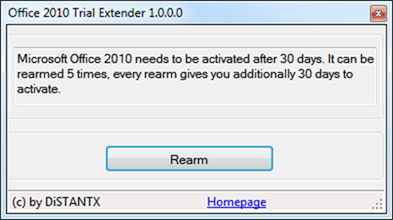 Again, this tool can be used 5 times which means 6 months of free full featured Office 2010 usage, or in other words, 180 days. This is a totally legal method in case you have any doubts.