Volume Mixer for OS X brings application level volume control to OS X Yosemite. It is a light weight app which sits in the menu bar and allows users to individually change the volume for any app, with the help of an optional driver.

Volume Mixer has the same functionality as Windows’ built in volume mixer provides. Microsoft has been providing this feature since Windows Vista however Apple does not have such an option in OS X. So this app makes it easy for new Mac users, who were used to Windows’ volume mixer, to feel right at home in OS X.

In addition to the above mentioned functionality, Volume Mixer also supports volume control for output devices such as to Bluetooth audio devices, USB headsets or televisions via HDMI. This is pretty useful for users who have different apps running at the same time as well as multiple audio output devices connected. 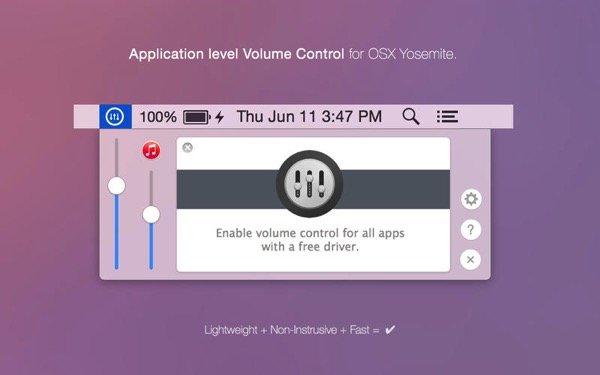 Volume Mixer is available in the Mac App Store for $4.99 and works with OS X 10.10 Yosemite only. Support for OS X El Capitan is planned after it’s released to the public. To enable support for all apps, you must download the optional audio driver from their website.