The popular and versatile messaging app,Whatsapp, has been updated to version 2.16.7. The new update contains features and functionality improvements including larger emojis, zoom during video recording, improved performance and more. 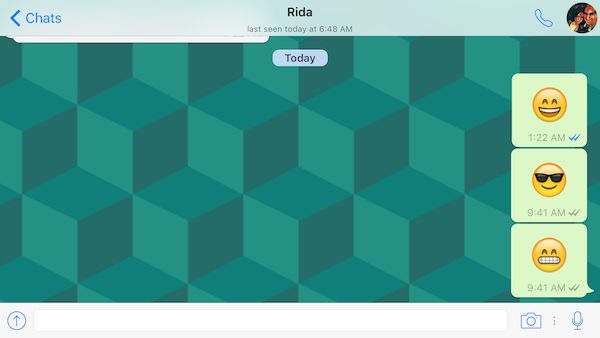 Like Snapchat emojis, Whatsapp has increased the size of single emojis sent in chat. Previously, only the heart emoji appeared bigger (and animated). Other emojis are not animated, though.

Whatsapp has been working on catering to the evolving needs of its users and introducing features to keep Whatsapp pertinent. Audio calls were introduced last year while end-to-end encryption for chats and desktop apps were introduced this year. As reported by The Verge, Whatsapp has also been testing video calling in a beta version of the app with a group of testers. Whatsapp already provides text messages and audio calls, so the inclusion of video-calling is the obvious next step for the messaging app. Facebook, the owner of WhatsApp, already provides audio and video calling solutions in its Messenger app for smartphones and tablets, so it will be interesting to see if they decide to introduce integration between them.