WhatsApp has been updated for iOS 10 with support for Siri, phone calls, widget, improvements to message forwarding, and camera functionality. 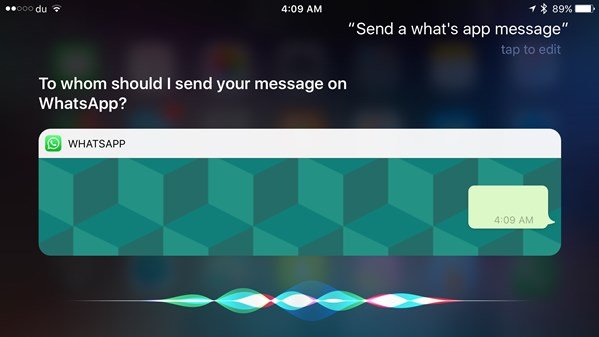 While the list might not be long, the number of updates in WhatsApp version 2.16.10 are huge. iOS 10 has opened support for third-party apps to utilize Siri and show phone calls on the lock screen like cellular phone calls. The new WhatsApp update takes advantage of both these features to provide deeper integration with iPhone’s software.

WhatsApp has also introduced a new widget which shows recent conversations in the notifications center. This widget can be accessed from the lock screen as well though it requires iPhone to be unlocked for the app to launch. The widget is only for iOS 10+ devices. While it is unclear what makes it compatible with iOS 10+ only, it is a good addition nonetheless.

Other non-iOS 10 updates include improvements to message forwarding, frequent contacts when sharing content and support for double tap to switch between front and rear cameras when using the built-in camera feature in WhatsApp. With the improved message forwarding, users can now forward messages to multiple contacts at a time. Photos and videos also have a forward button to make it easier to share them. When sharing content from other apps to WhatsApp, the contact list shows frequently contacts on top. This is something we wish that iMessage also had since it was introduced but it still does not.

WhatsApp has over 1 billion active users and almost 100 million calls are made per day using the messaging service. These iOS 10 updates should make it convenient for WhatsApp users on iPhone to use it for their messages and phone calls. The company should focus next on making a proper watchOS 3 app for Apple Watch users since their current support leaves a lot to be desired.