So, how is it fake? Very simple. As TC pointed out, Apple has ‘predicted’ ( assumed/lied would be a better words ), that the billionth app would be downloaded at 1:24:06 AM PST on April 23. This can be confirmed if you readjust your computer’s clock to any time after the one mentioned in bold, you’ll be greeted with this: 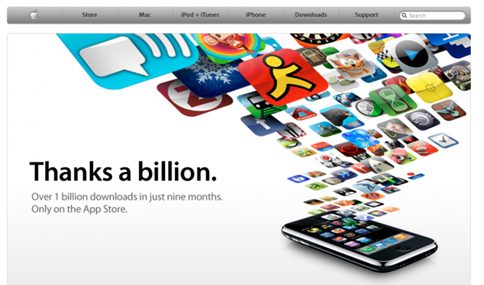 The counter will also jump ahead if you increase the time on your computer’s clock to a time near the the billionth app download time. While, there is also a mention of the time being tweaked in this file, it doesn’t change the fact that Apple is predetermining the time, and hence this is another example of the Reality Distortion Field being executed brilliantly to fool millions of users. Oh, and a somewhat ridiculous statement by MG Siegler in that blog post:

Not that it’s all that surprising. After all, with so many apps being sold every second, can you really expect Apple to do anything other than estimate?

I can simple assume that MG is unaware of Web Analytics. I wouldn’t expect such an immature assumption by an experienced blogger, unless he is a fan boy blinded by RDF. Oh wait..

So, there you go folks. Apple is doing it yet once again.