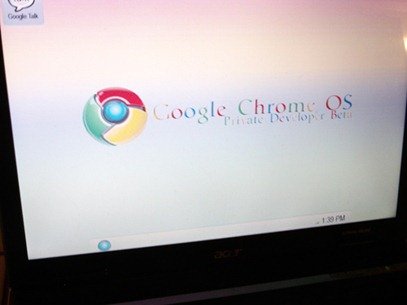 Some guy claims to have taken pictures of an early developer Beta of Google Chrome OS. He works with some company who supplies parts for Acer laptops and got a chance to take the pictures because he was the last person to leave the room and had his mini cam with him. He also says he is “putting my career and notability on the line in this”.

While I wont bet on this, I’m amazed at how much information he has given out in the bold parts. It’ll be very easy for Acer or Google to find out who he is and sack him. Also, if it was such a private demo, how come he was allowed to have a mini cam with him? Also, the Google logo shown in the wallpaper is very different than the official Google logo. Notice the difference in letter colors.

There is a button on the Chrome Bar (At least that is what the Rep called it.) that is basically the blue center of the chrome logo. This button pulls up a Start Menu clone essentially. The Reboot, Programs, and Main Directory is located here.

The navigation uses two options. “Exploration” or “Browser”. Explanation is much alike the Windows Explorer. The Browser uses search options. In Browser Mode, the Google Chrome Browser comes up and you can search and also use the “Most Visited” features for your files. This part was rough feeling and Google Stressed this Dev Beta is extremely early and has much to work out.

Wow. So much for a web based OS if it has a start menu ripped right out of Windows and even contains programs. Isn’t the browser supposed to handle the programs in Google Chrome OS? Why need a ‘Windows Explorer’ when the web is the platform for Google Chrome OS? Either this guy is making stuff up, or Google isn’t sticking to their web based OS claims.

In addition a search bar can be implemented on the Chrome Bar. Programs appear in a Windows 7 Esque icon fashion.

Really? So much for Google implementing a new windowing system:

The software architecture is simple — Google Chrome running within a new windowing system on top of a Linux kernel.

I admit, since it’s an early beta, it could be real and there must be a lot of work left to be done. But then again, I’ve got my doubts. What do you think?