Windows 10 has been showing rapid progress with new user interface changes and polishing in every new build. Most of the new updates are already shown in leaked builds before they can even make their way to Windows 10 Insider Previews. This has become a tradition kept intact by the latest leaked Windows 10 build number 10125. 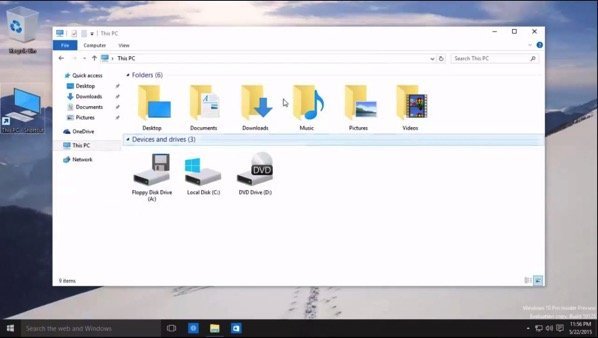 As it was already expected, the new build contains brand new icons for folders, drives, devices, ‘This PC’ and more. The icons look beautiful and are not a major departure from previous Windows versions. Apart from this, Windows Hello, Microsoft’s facial recognition solution is also found in the release although it requires compatible hardware to work so it is highly unlikely that it will work on current configurations.

Start menu has received further updates and contains a grid of letters for quickly jumping to the apps you want. If you use Windows Phone, you will realize that this is the same user interface element as on the smartphone start menu for quickly accessing apps. Jump lists in the task bar have gotten a makeover and it seems that they have gotten a dark user interface, for the first time since they were first introduced in Windows. The jump lists color update is also reflected on the Start Menu. Let’s hope Microsoft sticks with this color scheme as it looks way nicer than the previous one.

The updates are rounded up with improvements and changes to the tablet mode and the settings app (which has been a constant work in progress and still seems to be).

Here is a quick video walkthrough by Winbeta:

Head over to Windows Central for an indepth look at everything new in this build.

If you know where to look, you might be able to get your hands on Windows 10 build 10125 but I would highly recommend against doing so. It is better to wait for the next Windows Insider Preview to test drive the new updates and features rather than use something you are not supposed to.

Windows 10 seems to be shaping up very nicely and it would be interesting to see how well and quickly it is adapted by users, compared to Windows 8.