WhatsApp had rolled out a web based client for users a while back, which works with almost all platforms such as Android, Windows Phone BlackBerry, Series 60 and Series 40. While it works well, it does not give the same smooth experience that a desktop app, with integration for the operating system’s features can provided. Luckily, there is a solution in the form of WhatsMac for OS X users. 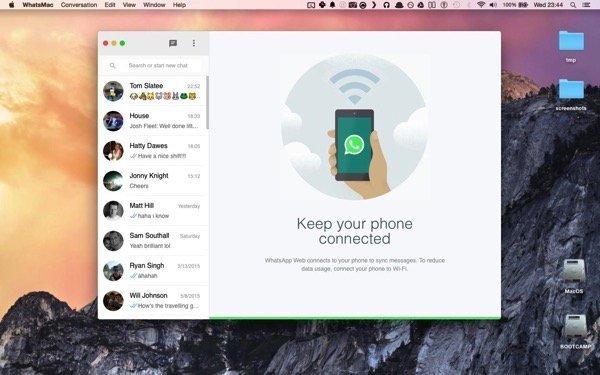 WhatsMac is an open source app for Yosemite OS X 10.10 users which connects to phones and allows users to send and receive messages, just like the browser version. This is not an official app but it does a great job at providing a decent user interface to work with.

To setup WhatsMac, users have to scan the QR code using WhatsApp on their mobile to authenticate. Once done, users can use it like any desktop messaging app.

Along with the usual messaging functionality, users can receive notification, which are native to OS X notification center. Keyboard shortcuts are also supports for starting new conversations, searching through them or switching between them. Apart from uploading (dragging images/videos to the window works though) or recording media using your Mac, all other features such as chat, media viewing and downloading work very well.

The app does not save any information or use any servers in the middle to relay the information. It is basically the same WhatsApp web app that you use, which runs inside a desktop app wrapper.

If you are a regular WhatsApp user, who does not use an iPhone, give this app a try. Meanwhile, we iPhone users will keep waiting for WhatsApp to roll out the functionality to our phones.