Satisfy your taste buds, beta testers. The Windows 7 beta is very near! 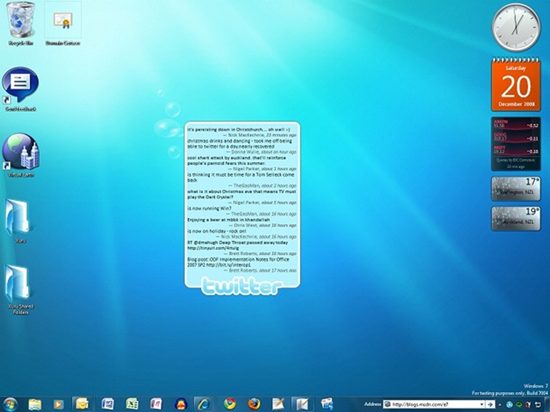 Scott Wylie is Microsoft New Zealand’s Director of Platform and Development Strategy and posted this image on his blog post on his experience with this pre-beta build which is version 7004.0.081203-1830 according to WinFuture. This is still pre-beta as noted by Scott. No noticeable changes can be seen in this build so far. I do have hopes of new gadgets which enhance our experience, but time will tell. Also, interesting to see that Scott uses Chrome and Firefox as well. Not bad!

Windows 7 is Microsoft’s latest operating system releasing soon. This new version aims to please those who found Vista to be a resource hog and not worth their money. Vista was a not only a delayed release but it also cost a lot of bad publicity to Microsoft due to bad performance, utilizing more hardware resources than it should ( Windows 7 requires less memory and hard drive space despite being a newer OS! ) and deliver less than what was promised. Despite Vista’s release and the fanfare surrounding it, many users are still opting to stick with Windows XP since it’s a mature and stable OS and just works with everything out there. There are no UAC annoyances, software incompatibilities, driver failures ( I’m looking at you Nvidia! ) and all the things we’ve come to loathe in Vista

Here’s to hoping that Microsoft has finally gotten its act together with Windows 7 and learned from the mistakes they did with Vista. From what we’ve experienced so far, it seems like they have learned a lot. Under Steven Sinofsky’s leadership, we have nothing but high hopes for Windows 7 to be the OS that people actually want to use after Windows XP.