Rafael Rivera of Within Windows did a little digging around and found some interesting bits in the next Microsoft Action Pack Subscription quarterly update kit, which will ship on 5th January. According to him, the beta build has already been finalized internally and it’s just a matter of time before we get our hands on it. As reported by Mar Jo Foley, the beta build number will be 6.1.7000.0.081212-1400, where as we have already seen a screenshot of build 7004.0.081203-1830. No word on the private beta invites that were sent out to select beta testers a few days earlier. Anyhow, it seems that Windows 7 won’t stay in private beta testing for long.

Here’s a screenshot of the kit contents posted by Rafael. 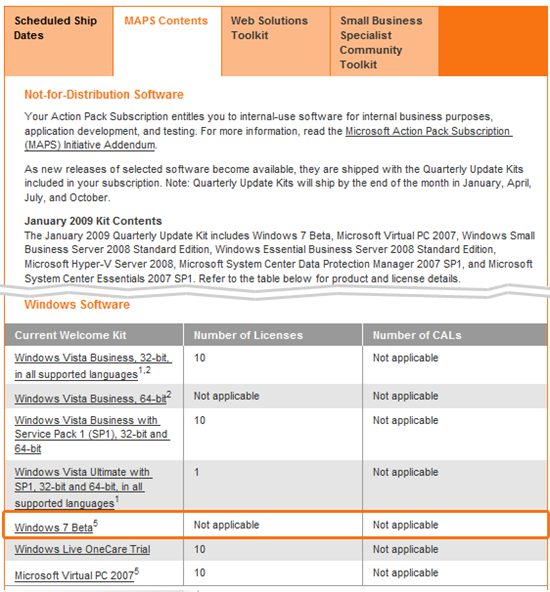 We’ve been closely covering Windows 7 and its new features lately. Not only does it feature performance improvements, it features new power saving options, a new task bar ( dubbed the ‘super bar’), requires lesser disk space and even fixes the file copying bugs that we’ve grown to hate in Windows Vista!

Windows 7 is not a major release unlike some people wanted. It’s a minor incremental release, feature the same kernel mostly as Vista. It does have a few changes and contains spit and shine here and there that Vista missed. Windows 7 is more stable, contains many UI improvements, fixes the UAC issues as well as boots faster! We especially love the new boot screen that ships with Windows 7.

We just can’t wait to get our greedy hands on Windows 7 and test it out. We’ve really had enough of Vista and really want a better OS and Windows XP is simply not an option anymore since, well, it’s so 2001.

Let’s hope Microsoft doesn’t disappoint this time and has learned well from the Vista debacle. From what we’ve heard, the Windows 7 beta is going to be really amazing!