Tom Warren from Neowin has published some screenshots and insider information for the upcoming Windows Live Wave 4 which include Windows Live Messenger 2010 and Windows Live Writer 2010 redesign. The images really look like a work in progress, so if you think they’re fake or look bad, remind yourself that. 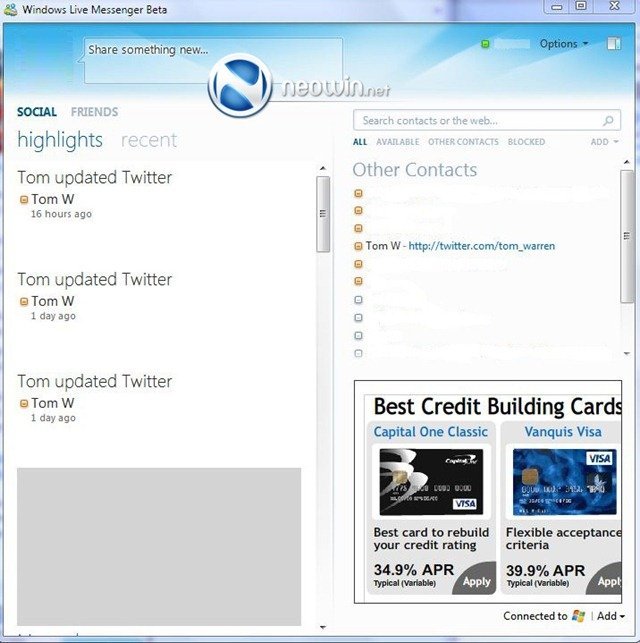 The main Messenger window has gotten a huge uplift and it’s not narrow anymore like the current version we use. It now has a Zune desktop app like UI and contains a ‘Social’ column on the left side. Highlights which currently show at the bottom of Messenger are shown in this column such as new Tweets, Facebook updates or blog posts. I’m sure this feature would be optional just like it is in the current version of Messenger.

The contacts column also has a Zune-ish redesign and instead of a drop down list, it contains quick links to alternate contact lists such as ‘other contacts’ and ‘blocked’. There’s also a huge share box at the top, similar to the Facebook share text field. I hope this would let you publish to your social service directly from Messenger, but then that is yet to be seen.

If you notice closely, the bottom right of the window says ‘Connect to *Windows Live Logo*’. There seems to be an option to ‘Add’ more services along with it since an option to add contacts is provided next to the links to alternate contact lists. I wonder if Microsoft plans to open up Messenger to more services, or maybe allow us to link to Facebook or Twitter. This is all just speculation on my part, but it seems possible from the screenshot.

Another much-wanted feature is the inclusion of tabbed conversations. Personally, I’m very happy with the way conversations currently work, and knowing Microsoft, they’ll probably make this an option. But the tabs remind me of Internet Explorer 8 and the dreaded lag in tab opening and switching. Here’s hoping that ‘feature’ doesn’t come to Messenger too!

And finally, Windows Live Writer 2010 shown above with the much-anticipated Ribbon upgrade. This is probably the best product in the Windows Live Essentials lineup, and the inclusion of ribbon will make it more productive to use.

We expect official information to be revealed on Windows Live Wave 4 at the Consumer Electronics Show in January. Hopefully, Live Mesh will get some focus too then. Stay tuned!