Much like Periscope who recently integrated with Twitter and Facebook, YouTube app users will now be able to stream live videos simply by pressing the “big red capture button”, selecting a thumbnail image and voila, they would be live streaming. The videos will be treated just like other videos on YouTube with users being able to search for them and find them through recommendations and playlists. 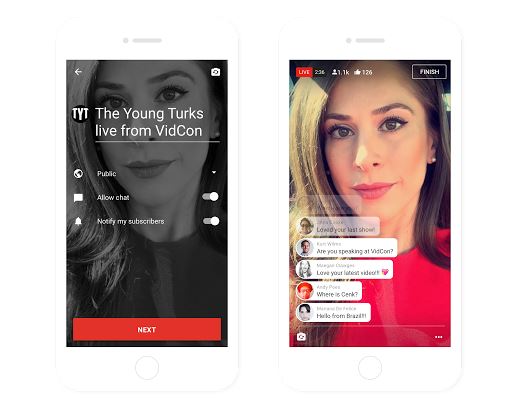 Facebook has, since January, been pushing its live streaming feature heavily with as well as media outlets celebrities using it to advertise themselves.

Just as with the Periscope app, users will not have to create any additional accounts and will see chat bubbles, be given audience numbers and other metrics on the screen while streaming. The videos will also be protected from unauthorized use.

YouTube touts that this new feature on the app will be “faster and more reliable than anything else out there”.

Today, we are announcing a new chapter in bringing the power of live video to creators everywhere. Soon, we’ll be putting the power of YouTube live streaming in the palm of your hands. YouTube mobile live streaming will be baked right into the core YouTube mobile app. You won’t need to open anything else, just hit the big red capture button right there in the corner, take or select a photo to use as a thumbnail, and you can broadcast live to your fans and chat in near real time.

While YouTube’s live video streaming should prove to be popular with time, Facebook and Periscope have already made it mainstream. Facebook has had some popular live videos, including controversial ones, that made it to the news. Facebook has brought live video broadcasting to its 1.65 billion users so YouTube Live will have some tough competition. We regularly see celebrities broadcast live videos on Facebook for Q&A sessions or people just streaming events from around the world. Periscope by Twitter has its own loyal user base so it will be interesting how the live streaming wars pan out.

The update will be rolling out soon to YouTube app users on iOS and Android.