I’ve been reading a lot of blogs and tweets lately on how Zune HD is Microsoft’s reply to iPod Touch. Even some people from Microsoft have been labeling it as an iPod Touch killer, which is totally ridiculous. Just because it has a browser and multi-touch, doesn’t mean it falls into the same category of devices as Touch. It is more of a competitor to Sony Walkman and Samsung’s PMP than the iPod Touch.

Here are my reasons:

Sure, it’s called an iPod. But it’s not just a device made for listening to music and watching videos. It works with almost all of the (approximately) 50,000 applications in the App Store, which as Apple says it, ‘Solve life’s dilemma’s, one application at a time’. It’s very difficult to compete with that. Microsoft might have to start from scratch if they decide not to bring Windows Mobile Marketplace to Zune HD. Even if they do, the developer support for App Store is very strong and a force to reckon with.

Look at the UI of an iPod Touch and then look at the one on a Zune HD. Which one looks more suited to applications? The UI on Zune HD doesn’t even look as if it has been made keeping any sort of application support in mind. Heck, it doesn’t even have a clock! If somehow it does, a user will have to dig deep into sub menus. ‘More’ seems to be the only place where they might have applications or games. I might be wrong and the final UI could change but at the moment, it looks far from giving the iPod Touch a run for its money. 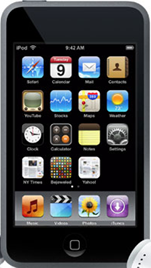 Internet Explorer for Windows Mobile 6.5 is the worst joke ever. If it’s not a joke, then it’s a shameful browser. With Android, iPhone/iPod Touch and Pre supporting HTML 5, and have been proven better than IE by miles, where does the Zune HD stand in all this? Will they make a new browser for it or port IE to it? Whatever they do, the browser will have to be very good to even match Safari. Just having multi-touch doesn’t make a browser good.

New games hit the App Store almost daily that make use of multi-touch and the accelerometer in the most innovative ways possible. Sims 3 is the newest entrant to the App Store and contains in-game buying options, good graphics, and an immersive experience. App Store has a list of some of the biggest game developers in the world supporting the platform. Microsoft hasn’t even put gaming as a feature on the Zune HD website! Although XNA can be used to make multi-touch games, it’ll take some convincing on the part of developers and publishers and a good attractive market share for them to support Zune HD. But at present, Zune HD is no competition for the iPod Touch in gaming.

Zune HD boasts of Zune Social. Does anyone even care for it when the iPod Touch has applications for Facebook, MySpace, LinkedIn, Twitter and other popular social networks? People use these networks like anything on these devices, and not supporting them would be like missing out on a lot. Since no application support has been announced for the Zune HD, iPod Touch gets another advantage here.

Zune HD: Only US

How it could compete:

This is just my opinion based on current speculations and hype being generated for the Zune HD as a competitor to iPod Touch. The Touch is a great device and so far it has no competition. If Microsoft really wants to go all out against it with the HD, they will have to go hard on all fronts such as gaming and apps along with availability. Otherwise, it’ll end up just like the new Sony Walkman, which also has an OLED screen.