iPhone 7 single-core and multi-core benchmarks have shown up on the popular Geekbench website. The scores show that the new A10 SoC in iPhone 7 only outperforms iPhone 6s’ A9 processor by approximately 35%, it also beats the iPad Pro 12.9″ A9X SoC. 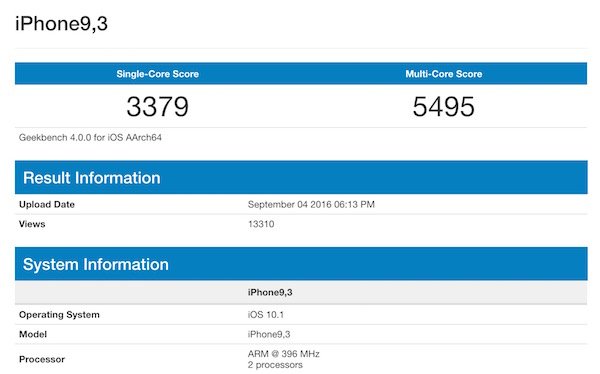 Compared to iPhone 7’s single-core score of 3379 and multi-core score of 5495, the iPhone 6s A9 chip scores are 2513 for single-core and 4285 for multi-core. The A10 actually beats some low-powered Core i3 and Core i5 Intel processors with these numbers.

It is difficult to say whether the benchmarks are authentic or not, but John Poole, who is a Geekbench developer, responded that it is not an obvious fake.

I’m not sure. It’s certainly not obviously fake.

If you are wondering why the benchmark shows 396Mhz clock speed, instead of the rumored 2.4GHz clock speed for iPhone 7, here is another explanation by John to clear it up:

iOS doesn’t report the frequency, so Geekbench attempts to measure it quickly. It’s not always accurate.

Considering that iPhone 6s and its A9 processor are still unbeaten in real world performance, it is likely that iPhone 7 will immensely extend this lead if these leaked benchmarks are to be believed.

It is important to note that as per Apple, A9 processor has 70% faster performance than A8 processor so it might be possible that we might see an even larger difference tomorrow when Apple announces iPhone 7. The larger amount of RAM and a faster GPU should provide enough reasons for users to upgrade for better performance. After all, a device that is expected to record 4K video at 60fps should have bleeding fast performance.

Only 1 day to go for Apple’s iPhone launch event for all these leaks to end and the real deal to be announced. Stay tuned for the latest news and updates on iPhone 7.