After its announcement at WWDC 2016, Apple Music has finally gained new personalized Mixes for subscribers on iOS 10 and macOS 10.12 betas. The new mixes, titled My Mew Music Mix and My Favorites Mix, can be found under For You section of the Apple Music app, along with other playlists. 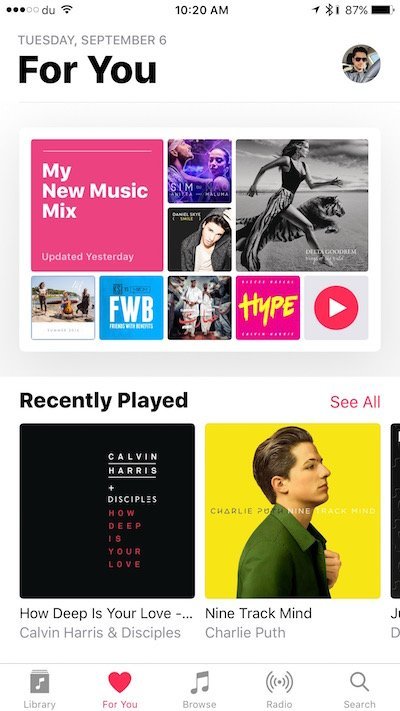 Originally announced as Discovery Mix, the new mixes curate 25 songs based on subscriber’s listening habits. Apple’s new mixes are a direct response to Spotify’s Discover Weekly playlists which are also personalized to every user. The difference between both of Apple Music’s mixes seems to be that My New Music Mix is generated on music playback while My Favorites Mix is generated on tracks that a user favorites (by tapping the heart icon) in Apple Music. 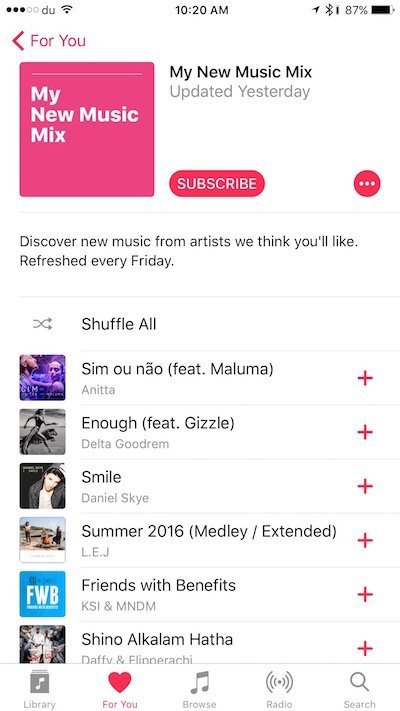 Users can subscribe to either of the new mixes to add it to their iCloud Music Library and have it automatically download all songs, every time the playlist is updated. There does not seem to be any manual way of updating the playlist apart from liking or disliking songs in the mix. This can be done by long pressing on any track in the list and pressing the like/dislike buttons which makes the song appear more or less in recommendations, based on your feedback.

During testing so far, I have found the mixes to be all over the place. Sometimes they show songs from genres I don’t even listen to and sometimes I am able to find new favorites. Since the feature has been introduced in beta Music/iTunes apps, I assume the mixes will get better with time.

These mixes are part of Apple’s continuous effort to improve Apple Music, both in terms of user experience and music discovery. Since its initial release, Apple Music’s app had not been appreciated much due to design flaws and odd UX choices. With iOS 10 and macOS 10.12, improvements have been seen and Apple Music is definitely headed in the right direction.

Apple Music for Android has also hit 10 million downloads in Google Play Store, which is a big achievement since the app has a low rating of 3.3 stars, which has improved with time from just a 3-star and below rating.

The new mixes are available now in iOS 10 and macOS 10.12 Sierra. Go ahead and give them a try if you are using any of these betas.