Apple has started distributing the first developer build of Mac OS X 10.6.5 since Friday night. This is the fifth release of company’s Mac OS X Snow Leopard operating system and is officially labeled as Build 10H525. This build follows Mac OS X 10.6.4 which was made public on June 15th just after WWDC. 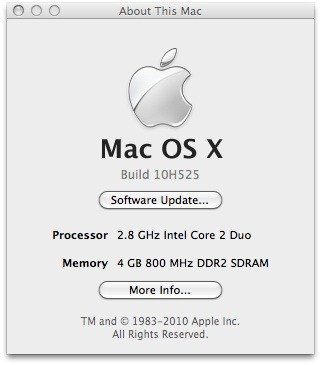 Apple has asked developers to particularly focus on testing iCal, Mail, printing, OpenGL 3D Graphics, QuickTime and the X Window X11 subsystems. Till now only two issue are documented, one of which is related to enabling UI elements in Web Views such as in the iTunes Store and the other is caused when connecting to Exchange servers.

It was expected that Apple would seed the build a little bit earlier but it took a longer than expected. At this point we don’t know about the new features in this build. But Apple has pointed out to the developers that this build has the latest graphics drivers which are currently being tested simultaneously in the Snow Leopard Graphics Update. Apple has still not given any word when this build would be made public.