Internal Apple executive emails disclosed in the Epic Games vs. Apple lawsuit reveal how the tech giant came to its conclusion to take its infamous 30% cut on all App Store transactions in a way that guaranteed it was not “leaving money on the table.”

The email brought forth by The Verge features Eddy Cue, Apple’s SVP of Internet Software and Services, discussing the commission that Apple should charge for subscriptions through Apple TV in 2011. The company looked at several different options: a 40% one-time cut, a 30% one-time cut, a 30% recurring fee, or strike individual deals with different providers.

As reported by The Verge, the emails reveal the reasoning behind the tech giant’s decision to take a 30% cut on App Store transactions. While the fee is standard practice across all App Stores, it also helped Apple from “leaving money on the table.”

“The emails date back to a 2011 discussion, which included Apple software and services leader Eddy Cue, around how Apple would handle subscription video applications on the Apple TV — an important conversation, given the rise in popularity of streaming services. And while the discussion doesn’t offer much insight on Apple’s existing 30 percent fee for the App Store, it does reveal how malleable those rules were when it came to maximizing profit.” 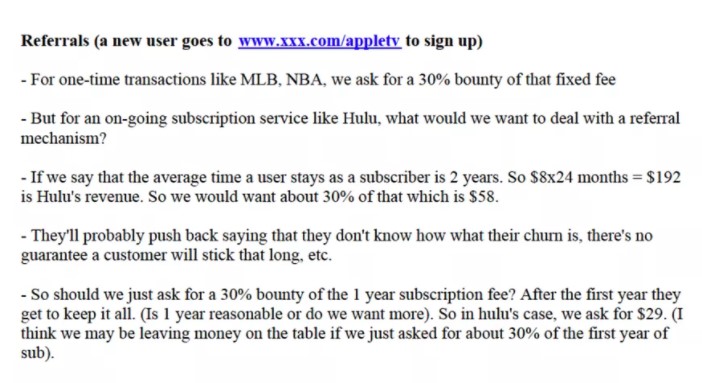 The thread reveals that Apple initially explored a mixture of different options for SVOD fees, these included a 30% recurring fee and a 40% one-time charge. The emails also consider the various sorts of content partners, and whether new streaming services would grant more or less revenue than “entrenched” cable/satellite operators.

Discussions around subscription fees for Apple TV eventually settled on adhering to the 30% share that currently existed on the iTunes and App Store. One executive said that while they were open to other deals, they wanted to protect the 30% fee that had long been the standard in the App Store.

Amid growing criticism over its ‌App Store‌ practices, in November of 2020, Apple announced its Small Business Program, in which the tech giant would lower commission fees to 15 percent for developers and app creators who made less than one million per year.