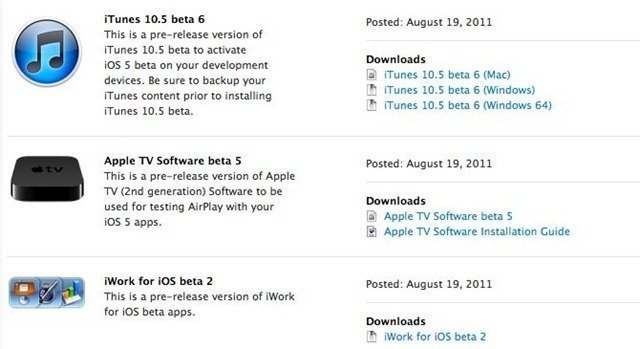 iOS 5 beta is available both as an over the air update (will work only on non-jailbroken  beta 5 or iOS 5 device) as well as available as full firmware downloads from Apple. Registered developers can download the IPSW files from Apple Developer Center. If you plan to upgrade, make sure you’ve backed up your data through iTunes to keep your data safe. To install iOS 5 betas 6, you need to be registered iPhone developer with Apple. Else, you can try using this hack to install and activate beta 6 on your iPhone, iPad or iPod touch, without registered UDID but do so at your own risk!

iOS 5 is Apple’s latest mobile OS which brings new features to iPhone, iPad and iPod touch which include notification center, Twitter integration, Reminders, iMessages, News Store and much more. Features such as notification center and iMessage bring iOS on par with some of Android’s features. Android has long had a notification center, accessible via a swipe down gesture from the top. iMessage also seems to be an answer to instant messaging functionality which ships with Android. iMessage will work between all iOS devices as well as OS X. The messaging service will have end-to-end encryption and will be linked to user’s Apple ID. It is deeply integrated in the messages app and seems ready to replace SMS for most users.

Currently, in beta for developer testing, the final version of iOS 5 is expected to be released this fall for consumers. It will be available for iPhone, iPad and iPod touch, with all of them getting the same features in the new release.