Today, Apple has released the final version of iOS 4.2 to the developers called Gold Master (GM) which is supposedly the final build before its made available to the public. Of course, only the enrolled members of Apple’s Developer Program have access to this build like all previous betas of iOS 4.2. The latest version of Xcode 3.2.5 & iOS SDK 4.2 GM have also been released as well as with the 2nd beta of iTunes 10.1. 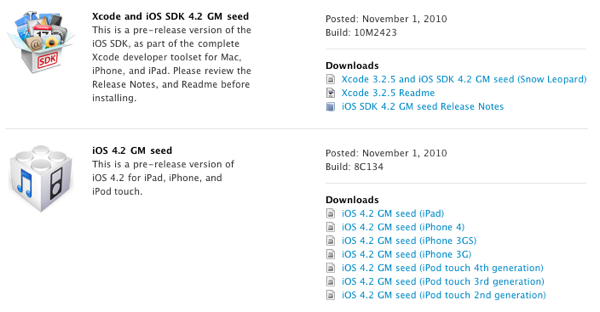 Below are the official release notes for iOS 4.2 GM (for developers only):

iOS SDK 4.2 provides support for developing iOS applications and includes the complete set of Xcode tools, compilers, and frameworks for creating applications for iOS and Mac OS X. These tools include the Xcode IDE and the Instruments analysis tool among many others.

There is a new Base SDK setting called “Latest SDK”. This is the recommended choice for all projects and will cause your project to always build against the newest available iOS SDK.

The iPad screen rotation lock switch now functions as a sound/silent switch in iOS 4.2. This switch behaves the same way as the Ring/Silent switch on iPhone.Applications targeted for iPad will need to take this into account when implementing audio behaviors.

Calendar can now import .ics files directly as a way to add events. If your app has access to .ics files, you should test importing them using the UIDocumentInteractionController API.

Applications can use the GKFriendRequestComposeViewController class to initiate friend requests.The GameKit view controllers for leaderboards, achievements, matchmaking, and friend requests must be presented modally.

iOS 4.2 devices can print wirelessly only to printers that support AirPrint:

Apple released the first beta for iOS 4.2 on 15th September, the second beta on 29th September and the third beta before this GM build was released on October 12. We still don’t have an ETA on when it will be made public but we’ll let you know for sure as soon as Apple makes an announcement. Share your thoughts with us in the comments section below.

Stay tuned to our website and keep following us on Twitterand Facebookfor latest updates for your iOS devices!