It hasn’t been much time since Apple launched Lion, Mac OS X 10.7, to the general public. There have been cries of various issues, specifically the unreliability of WiFi connections in Lion, due to which Apple has hurriedly released the first update, 10.7.1 to the general public. Weirdly, this build wasn’t even released to developers before general availability today while OS X 10.7.2 was seeded to developers. 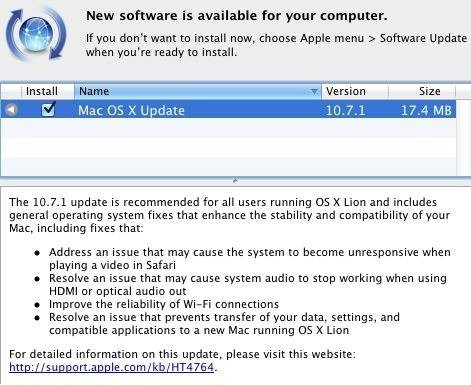 The update was release today and contains the following fixes:

More information available here: http://support.apple.com/kb/HT4764.  This update can be download directly from Apple’s website It is highly recommended that users upgrade to OS X 10.7.1 if they’re running Lion. Just open up Software Update in Lion and download it or you can download the update from the links provided above.
Catch up on all our coverage on Lion, Apple’s latest desktop/notebook operating system right here on iTD!