The conflict between Apple and Epic Games has gotten more intense as their digital and legal battles over App Store policy continue. Today, the developer informed on Twitter that the iPhone maker has given August 28 as the termination date for all of Epic’s developer accounts. Apple has also decided to severe Epic from iOS and Mac development tools.

On August 14, Apple removed the Fortnite game from the iOS App Store because of Epic’s new rebellious direct payment method. In the announcement post of the update, Fortnite’s developer very publicly called out Apple by deeming its policy of 30% cut in revenue of in-app purchases unfair. 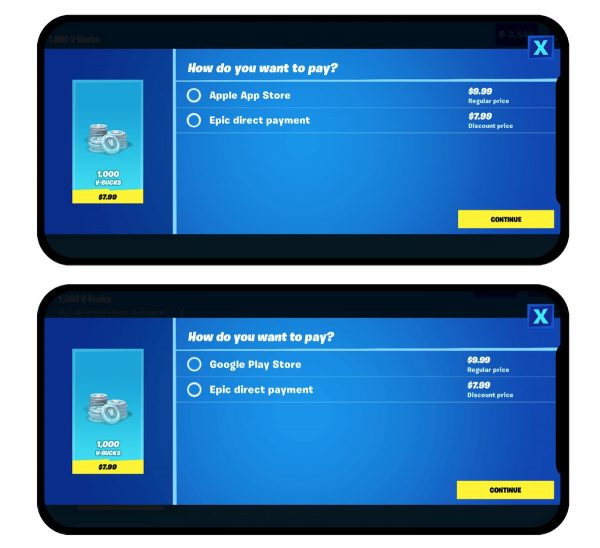 This update was also released for the app’s Android version which resulted in similar action from Google. As surprising as the update was, it immediately triggered a series of reactions from all sides, Apple, Google, and Epic Games.

Apple removed Fortnite from the App Store and has informed Epic that on Friday, August 28 Apple will terminate all our developer accounts and cut Epic off from iOS and Mac development tools. We are asking the court to stop this retaliation. Details here: https://t.co/3br1EHmyd8

Like the last time, this time Epic has a legal order ready against Apple to stop the removal of Fortnite from the App Store. The developer’s motion states that,

“Plaintiff Epic Games, Inc. (“Epic”) will and hereby does move this Court pursuant to Federal Rule of Civil Procedure 65 for a Temporary Restraining Order and an Order to Show Cause Why a Preliminary Injunction Should Not Issue

(1) restraining Defendant Apple Inc. (“Apple”) from removing, de-listing, refusing to list or otherwise making unavailable the app Fortnite, including any update thereof, from the App Store on the basis that Fortnite offers in-app payment processing through means other than Apple’s In-App Purchase (“IAP”) or on any pretextual basis;

(2) restraining Apple from removing, disabling or modifying Fortnite or any code, script, feature, setting, version or update thereof from any iOS user’s device; and

(3) restraining Apple from taking any adverse action against Epic, including but not limited to restricting, suspending, or terminating any Epic entity from Apple’s Developer Program, on the basis that Epic enabled in-app payment processing in Fortnite through means other than IAP or on the basis of the steps Epic took to do so.”

Since the companies have locked horns, the tech industry is questioning the motive of such a stern action by Epic Games. On Twitter, tech analysts questioned the developer’s motive behind the direct payment update and its similar revenue cuts by Sony and Microsoft.

They had the“1984 Apple Parody” video ready to go and also a 60+ page lawsuit ready, just moments after the ban.

They also had a Google lawsuit ready as well.

Seems like they were planning this for a long time.

Apple is often capricious, arbitrary and inept in how it moderates the store, and rent-seeking in how it manages App Store payments. But the principle of a sandboxed store and a unified payment system are very good for users and, actually, developers.

However, the developer has the support of its players and companies like Spotify.

Millions of players are now unable to play Fortnite on IOS devices for one simple reason, Apple and Google are two very powerful companies, but they are pure arrogance, they really don't care about their users, they only care about the money, help Fortnite with #freefortnite pic.twitter.com/OCqwjRbhhA

Previously, Epic Games too has been accused of making money off the music producers. Thus, this conflict is not black or white, it has a lot of grey areas, so whose side are you on and why? Let us know in the comments section.

Fortnite should put the actual rap songs behind the dances that make so much money as Emotes. Black creatives created and popularized these dances but never monetized them. Imagine the money people are spending on these Emotes being shared with the artists that made them