We may not know when the next generation iPhone may be launching, but after Bloomberg posted an image of what looks like a “Hypothetical Gross Margin Analysis” we sure know the price of the device. This image was found my 9to5Mac, as there is no story that accompanies the images by Bloomberg themselves. 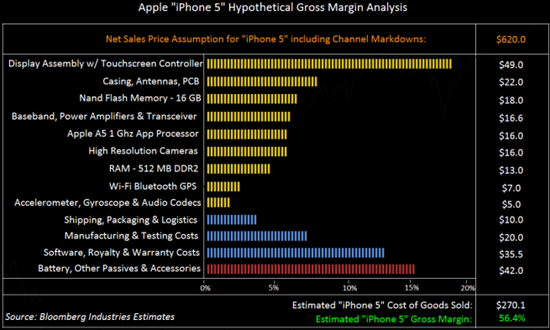 According to the image, the total cost of the device will be $270.10. The most expensive part will be the display and the cheapest will be the accelerometer, gyroscope and audio codecs.

Apple is said to be making a profit margin of 56.4%. The iPhone 5 will assumingly retail for $620, the current iPhone was selling for $699 without a contract when it first came out, however earlier this year Apple dropped the price to $649.

Although we believe the report to be true, we’re kind of sceptical of the 512MB RAM, we’re crossing our fingers for a 1GB. Another part that caught our attention was the 16GB storage. We really hope that Apple ditches 16GB models, and introduces 64GB iPhones to the market.

As we said previously, many reports contradict each other on the release date of the iPhone 5. While many say that Apple will host an event in August and release the device in September. New reports coming claim that the next generation iPhone will launch in October. Release dates are something reports will always fight about until Apple officially announces the event.

The iPhone 5 is expected to have a larger display, an A5 chip and much thinner than the current iPhone. We can’t be sure about anything here, but let’s just keep our fingers crossed. Stay tuned to stay updated on iPhone 5 news!