Titled Facebook Messenger, Facebook has officially released an app for Windows which lets you chat with your friends, watch their recent posts in the news ticker as well as stay up to date with notifications. According to Facebook, the app is being rolled out to a limited number of users, which answers the question as to why there isn’t an official page on this but just a help topic entry only. Strangely, despite being in a trial period, Facebook hasn’t called the Messenger app beta. 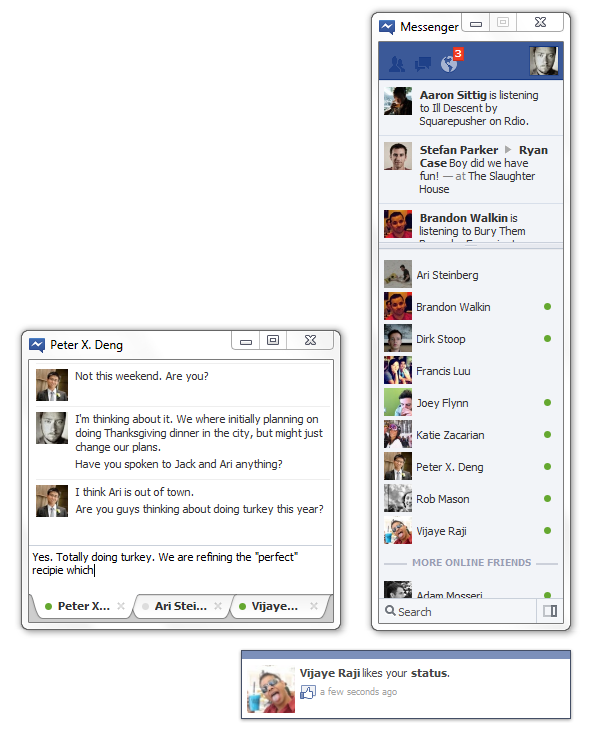 Facebook has previously released Messenger apps for mobile platforms namely iOS (Read more about Facebook Messenger for iPhone here and here), Android and Blackberry. Lucky for us, Facebook decided not to go with any third party framework such as Adobe ‘hog’ Air to build the app but has used native Windows APIs. The app even supports Aero Snap in Windows 7 – you can drag it to the side of the screen to make it stick there – similar to how Windows 8 metro apps work.

The app shows friend requests, messages previews, and notifications. Underneath, it shows the news ticker, friends available for chat and the search bar. An annoyance we’ve faced during testing was that the look and feel of messages is horrible when compared to the Facebook Messenger apps for mobile platforms. You can’t see previews of images and videos in messages like you can on Facebook and on the mobile Messenger apps. Clicking on any of the messages in the drop down in the header takes you to Facebook in your browser instead of opening a messenger window which really beats the purpose of this app. You can’t even change your online/offline status from the app itself either so in many ways, the app is very restricted.

For version 1, the app is pretty decent but we would like to see this app improved as these tiny bugs make it annoying sometimes. The notifications on the desktop make it worthy enough for any Facebook addict’s desktop, though.